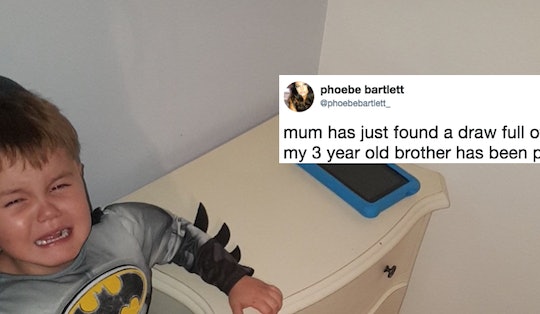 Anyone who has ever spent time around a tiny human knows that they are, essentially, pretty gross creatures. Not only do you get to experience changing their diapers for months on end, but once they grow up a bit, they really have no qualms about doing some pretty weird things. Case in point: this viral photo of a 3-year-old boy getting caught peeing in a drawer is making all parents laugh (and cry a bit) in commiseration.

On Tuesday, 21-year-old Phoebe Bartlett shared a picture on Twitter of her little brother, Freddie, crying after his now-infamous "p*ss drawer" was discovered by their mother. In the photo, Freddie's urine-stained drawer is open, and Freddie is sitting on the bed next to it in a Batman costume, crying. (It kind of sums up parenting toddlers perfectly.)

"Mum has just found a draw full off p*ss that my 3 year old brother has been p*ssing in and he blamed the dog," Bartlett captioned the photo. As comments started to roll in, Bartlett shared more of Freddie's drawer story.

Apparently, their mother thought it "smelt like wee" for about a week in Freddie's room, but couldn't find a patch of dog pee to clean up anywhere. On Tuesday, Freddie finally showed her the drawer full of pee — but blamed it on the dog.

"He's only 3 years old," Bartlett told BuzzFeed. "He must have been doing it while he's in his room watching his tablet, which is also on the drawer, and can't be bothered to go to the toilet, so he opened the drawer and was peeing in there."

The reactions on Twitter, as one might expect, were nothing short of fantastic. Some people criticized Bartlett for sharing a picture of her brother on the internet before he was able to consent to it, but (in usual older sister fashion) Bartlett wasn't bothered by those comments.

"Some people think it's hilarious and the best tweet, whereas others find it disgusting and think I'm a horrible sister," Bartlett told BuzzFeed. "But at the end of the day, it's my brother, and my mum is fine with it, so it's OK!"

The rest of the comments included a wide range of reactions. Some people thought it was the funniest thing they'd seen all day, others thought it was frightful, and others shared similar stories of their own (whether they shared throwbacks to their own childhoods or aired their own children's dirty laundry, if you'll pardon the pun). Here are a few of the best:

Some people wondered about the Batman costume Freddie was rocking, but as it turns out, that was just an ordinary wardrobe choice for the superhero fan. "He loves wearing Batman and Spiderman costumes and always wears them," Bartlett told BuzzFeed.

Regardless of the reactions, I'm fairly sure every parent has a story like this to share. A parent I know once found her two toddlers peeing into the potted plants on the driveway once, an experiment they didn't really have an explanation for (and one which the neighbors probably didn't appreciate, either).

In case you were wondering, Freddie's drawer was not salvaged after the peeing incident. His mom threw it out, and Freddie was left "crying his eyes out" after the whole thing. Freddie's loss was Twitter's gain, however, with Bartlett's tweet gaining over 90,000 likes within the course of a day.

Personally, I hope this viral photo makes it to Feddie's wedding one day. #SorryNotSorry, Freddie.

More Like This
Lawmakers Passed Two Bills To Address The Baby Formula Shortage
This Underwear-Clad Mom Saved Her Pet Goose From An Eagle While Breastfeeding
Johnny Depp’s Fans Are Harassing His Daughter Lily-Rose Online & It’s Not OK
This Mom Gave Birth On Graduation Day, So The University Brought Her Degree To Her