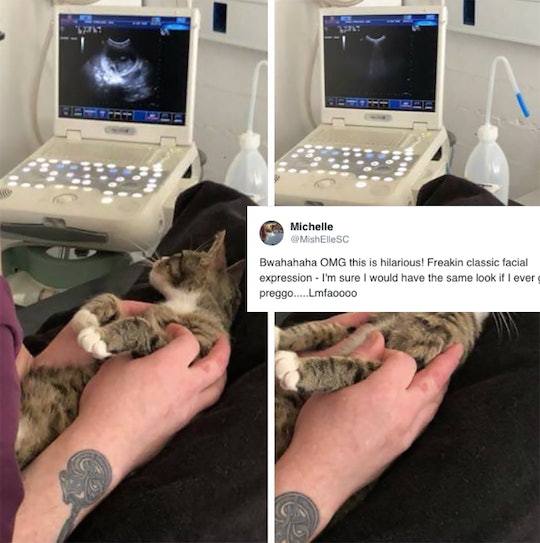 For some people, a pregnancy — even when it's planned — can come as a bit of a shock. It's not every day that you find out you're going to be a parent, after all. And someone who can appreciate this exact sentiment is a 1-year-old cat in Greenland who recently discovered she is expecting a litter of kittens. As it turns out, many parents can relate to the cat's shocked response to learning she's pregnant, and the commentary about the photo documenting the moment is pretty hilarious.

Ulla, a 1-year-old cat, was living on the streets before she made it to a non-profit animal shelter in Greenland called Dyrenes Venner i Grønland (which translates to "Friends of Animals in Greenland," board member Tone Frank tells Romper in a Facebook message). The staffers at Dyrenes Venner were familiar with Ulla as she spent some time at the shelter as a kitten. Although Dyrenes Venner set Ulla up with a family, the kitten ended up back on the streets, according to TODAY. Luckily, Ulla ultimately made it back to the shelter and its caring staff members.

Upon Ulla's return, however, Frank couldn't help but notice that she had put on a little weight. Suspicious about Ulla's condition, the Frank took her to a veterinary clinic on May 16 to get her checked out. To everyone's surprise (and Ulla's), the vet discovered about four to five heartbeats on the ultrasound. "It was pretty amazing," Frank said about the experience, according to POPSUGAR. "I've never seen a cat get an ultrasound. We saw little kittens in her tummy."

The best part is Frank was able to capture Ulla's "reaction" to the unexpected news. In a side-by-side photograph, Ulla seems to examining the ultrasound, as if she's thinking to herself, "what dis?" while the next photo shows her registering what she has just seen. Needless to say, Ulla's look of pure surprise is pretty priceless.

After Frank uploaded the shot to the shelter's Facebook page, he also shared it to Reddit. And it's the funny commentary on Reddit that made Ulla's photo go viral.

"I knew when my wife suddenly wanted to eat most of my falafel pita. I had the same look as this cat cos 'wtf is wrong with you! Bogarting my falafel,'" one person penned, according to Reddit. "And then quick realization 'omg you're knocked up!' So a test proved it positive."

"Oh I remember that face all too well when I found out I was pregnant, another person added. "Shocked me. Thought, 'what's that extra line for....oh s**t.'"

Another person chimed in: "Aaaaw. Reminds me of when I found out I was pregnant, shock mixed with excitement and fear."

"No matter what the species, the expression is all the same," a commenter wrote.

Others came with jokes.

"I swear I can explain," another person joked about Ulla's expression.

"Is that the CAT scan or PET scan?" a fan asked about the post.

Although the photo is humorous, there's also a serious side to it. Ulla getting pregnant in her first year of life speaks to the sad fact that many homeless animals aren't spayed. Spaying your pet is important because it can reduce the risk for infections and life-threatening diseases. "Spaying helps prevent uterine infections and breast tumors, which are malignant or cancerous in about 50 percent of dogs and 90 percent of cats," The American Society for the Prevention of Cruelty to Animals' website states. "Spaying your pet before her first heat offers the best protection from these diseases." Sadly, many animals on the streets don't have the opportunity to be spayed — a fact that explains why animal homelessness is a big issue throughout the world.

In the meantime, here's to hoping Ulla has a smooth and safe delivery.