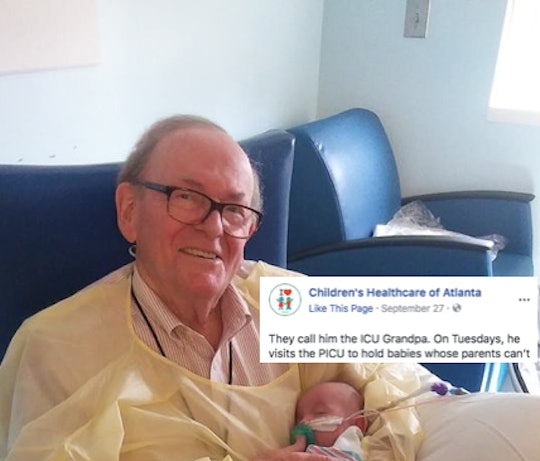 This Grandpa Cuddles Newborn Babies When Their Parents Can't, & Your Heart Will Melt Into A Puddle

Charity disguises itself in many forms. People give all that they can for others — whether that be through money or just showing their compassion and love in general. Yes, you can change a person's life and help them, just through caring and kindness. For example, this viral photo of a grandpa cuddling babies in the NICU will both melt your heart and show just how a little act of charity and kindness can go a long way.

They call him the ICU Grandpa. On Tuesdays, he visits the PICU to hold babies whose parents can't be with them that day. On Thursdays, he makes the rounds in the NICU.

The "ICU grandpa" (real name, David Deutchman, according to Newsweek) has been cuddling babies and providing his charity to the hospital for more than a decade. The post continues, stating: "This photo captures just one precious moment with a legend of a hospital volunteer who's been holding patients, and their parents' hands, for 12 years."

In an interview with Atlanta news station, 11 Alive Atlanta, Deutchman had the cutest things to say about his volunteering job. Deutchman said:

Some of my guy friends, they ask me what I do here. And I say "well I hold babies. I get puked on, I get peed on," and they say "why would you do that?!" Some people just don't understand the kind of reward you would get from holding a baby like this.

Deutchman's favorite part about volunteering at the hospital is the unpredictability of it all. Deutchman told 11 Alive Atlanta:

Deutchman is so right about how his small act of kindness provides a big reward. Not only is it rewarding for him, but it is incredibly rewarding for the babies that he holds. One 2014 study on premature infants, published in Biological Psychiatry, found that the babies who were held had more predictable sleep patterns, steadier heart rates, and better attention skills that lasted well into their childhood, according to TIME.

The science behind this is primal. The study's lead researcher, Ruth Feldman, a professor of psychology and neuroscience at Bar-Ilan university in Tel Aviv, told TIME:

Every mammal has to be cuddled and in close proximity with its mother in the first few weeks of life. This builds up the bodily systems that are sensitive to a physical presence. We think of prematurity as a proxy for maternal denial, since babies are outside the womb and away from their mothers for months.

But premies in the NICU aren't the only ones who benefit from being cuddled. One Pittsburgh, Pennsylvania hospital found that babies suffering from heroin withdrawal, after being born to mothers who used during pregnancy, benefit from being held by hospital volunteers. "They are very irritable; they are hard to console," Maribeth McLaughlin, chief nursing officer and vice president of patient care services at Magee Hospital in Pittsburgh told TODAY. "This is about swaddling them and giving them that safe and secure feeling."

Most hospitals have volunteer programs, where anyone can help out in so many ways — and now more hospitals are allowing volunteers to cuddle babies. Reach out to your local hospital to see if they have a cuddle program and what you can do for them. You too, can be possibly be like the NICU grandpa and help a baby in need (viral Facebook post not guaranteed).