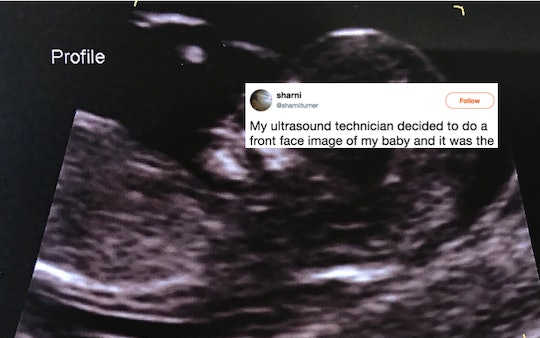 This Viral Photo Of A Mom's "Terrifying" Sonogram Has People Shook

It's always a moving experience to get a sonogram and see how your infant is doing throughout your pregnancy. It's usually hard to make out distinct features, but with a little imagination, you can get the general idea. Well, you might be thrilled to hear that your sonograms were confusing AF after you see this viral sonogram of a mom's demon-like baby. Uh, yea, it's spooky. Australian mom-to-be Sharni Turner posted a picture of her sonogram to Twitter, explaining that the nurse talked her into a front-facing image of her baby-to-be.

She was rightly shocked by what she saw — it looks like a straight up demon out of a horror movie. Luckily, it's not a monster, obviously. Just, the image of a skull from the front captured with an ultrasound machine can look like one. It's so common that other moms shared their own demon baby sonograms in some of the replies to the tweet. If you had a creepy sonogram, you know how unnerving it can be look at one.

On BabyCenter.com, there are whole forums dedicated to the phenomenon. One user started the forum last year writing, "Anyone else get really creepy baby pics at their ultrasound? My baby looks like skeletor lol."

A skeletor is one thing. But this? This is something else.

This is not the first demon-themed sonogram floating around the internet. In 2016, another sonogram went viral for depicting an actual, sitting demon to the right of what appears to be a cute, sleeping newborn. For months, the picture garnered comments on Imgur, with people debating what it could all mean. Or, as one viewer pointed out, that it might have also been a "friendly mermaid" and not a satanic ghoul in the woman's womb.

Or, you know, that everyone was seeing things. According to the original poster, the couple asked asked the sonogram technician what it could be. “They didn't really have an answer besides they haven't seen something like that before. Kinda an interesting story with a photo to go along," they wrote on Twitter.

Here Are Some More "Demon Babies"

Of course, technicians can't tell new parents what the "demons" are in the pictures because they're really nothing at all except the way the light is captured with the machine. That's all. But some people choose to read more into than that. It's one thing to shake off a sonogram image when it's creepy, but what about when it's angelic?

This summer, a Pennsylvania couple claimed that they saw Jesus in their sonogram. "It was a shock, I didn't actually know what to think," Alicia Zeek told USA Today. Zeek added that the sonogram was in response to a health scare, so seeing the son of God brought her some peace of mind and made her feel like her infant has a lot in store for her. Their first child was born with two thumbs on one hand and their second with a cleft palette.

"We both feel like she has a special purpose or, like, she's going to do something great," Zeek said of the Jesus-sonogram. They were so into it that they even planned on looking at all of their old sonograms to see if they could see Jesus in those ones, too.

In February, another couple noticed that their infant was making the "rock and roll sign" with its fingers in the ultrasound, which was pretty hilarious.

"My reaction was just uncontrolled giggling, followed by disbelief and more giggling. My husband was the first one that initially spotted it. He was so amazed and excited by the little rockstar," Makelle Ahlin told HuffPost at the time.

Whether it's demon babies or angels, sonograms can be creepy AF for first-time parents. Just remember that your baby is probably just fine either way.

More Like This
Amanda Gorman Spoke The Truth In Powerful, Viral Poem After Texas School Shooting
19 Children & 2 Adults Killed In Mass Shooting At Texas Elementary School
What Is Monkeypox & Should You Be Worried? Here’s What You Need To Know
Mom Gave Birth On The Side Of The Road... With Her Five Other Kids In The Car