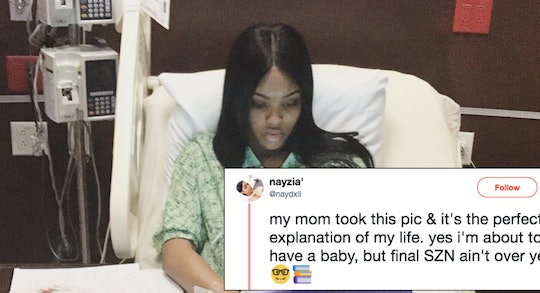 Any college student (or former college student) will tell you that finals week is tough. It's the one acceptable week when you can live in your pajamas, shut out the rest of the world, and make your textbooks your best friends. It is such a stressful time that people feel as if they can barely make it out alive. But there are some people who manage to do it all. Like, for example, this new mom finishing her finals while in labor who will put all of your memories of finals week to shame.

This photo of the mom has been circulating on Twitter for a very good reason — it highlights just how strong and powerful women are, especially during the times of extreme stress (from multiple places). In the photo, new mom Nayzia Thomas sits in a hospital bed, looking calm and collected, while an open textbook sits at her side and her laptop remains poised on her lap.

"My mom took this picture and it's the perfect explanation of my life," Thomas captioned the photo. "Yes, I'm about to have a baby but finals season aint over yet." This could be a perfect explanation for 2017 — while there might be huge events going on in your world (and the world around you), there is always something else that needs to be done.

People seem to agree, as the tweet has now gained over 100,000 likes because it is that powerful.

The story behind the photo is just as incredible. Thomas is a sophomore studying psychology at Johnson County Community College in Kansas, Missouri, according to Yahoo! Lifestyle, and was hoping to finish her finals before her son arrived. But, as most moms know, babies are unpredictable, and her son wanted to come into the world during her finals week. So she did what any dedicated student would do; she took her finals while going into labor. And just a few hours after the photo was taken, Thomas gave birth to a baby boy. Thomas told Yahoo! Lifestyle that she wasn't going to let her son's arrival get in the way of her GPA:

School is so important to me. I didn't want [the pregnancy] to be in the way. That's what people expect. You're a teen mom, you're a young mother. That's why my mom took the photo. It shows I follow through.

And Thomas clearly did. In a follow-up tweet, Thomas adds on to her incredible story. "We are blessed!," Thomas tweeted. "AND I'm finishing the semester with a 3.5 GPA!"

There is a reason why Thomas' story has gone viral — her story resonates with people and it hits hard. People have taken to Twitter to share their own stories and comment on how amazing Thomas' photo is.

As previously stated, Thomas' story really can resonate with so many women who are going through, or have gone through, the same thing. There are 4.8 million college students — or 26 percent of college students — who are raising dependent children, according to a 2014 study from the Institute for Women's Policy Research. And women account for 71 percent of student parents.

In spite of these numbers, it can sometimes feel as if this population isn't visible enough. Thomas' photo accomplishes that, bringing visibility to this percentage of hardworking college students and showing how women can get stuff done, even in the most stressful moments.