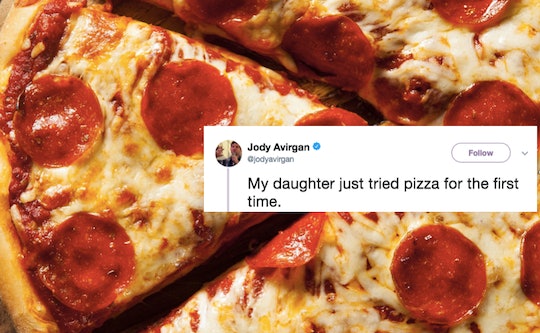 It's no secret that parenthood can be messy, frustrating, and exhausting business. But dispersed between all of the not-so-pleasant aspects of child-rearing, there are moments of absolute joy and love. Like watching your sweet baby smile for the first time. That first "mama" or "dada." Or witnessing your wobbly-legged child reach toward you with arms outstretched — and then take his very first steps. It's like you're seeing the world through the eyes of a child all over again. These milestones are straight-up magical. And this viral photo of a toddler eating pizza for the first time is the epitome of that pure childhood joy.

Jody Avirgan, the host of the FiveThirtyEight podcast — who also happens to be a father — shared a photo of his daughter on Twitter that almost instantly went viral, Mashable reported. And it isn't hard to see why. On March 3, Avirgan tweeted a photo that was captioned simply, "My daughter just tried pizza for the first time." The epic image featured his toddler in some sort of pizza-induced bliss. In the viral photo, the elated little girl is throwing her arms up in the air with her eyes closed and pizza sauce smeared around her mouth — as if she's praising the culinary gods for the best meal of her life. It's like she's reached pizza nirvana. And so many people can relate.

Seriously? Isn't this precisely what we're all thinking as we dig into a slice of heavenly pizza? (Answer: Yes.) Several Twitter users — with the help of GIFs — were quick to express equal feelings of love for the delectable food.

Others prepared the father for similar reactions to other foods.

One parent even shared an anecdote about the food that floored her child the first time around. "My son had the same expression the first time he had syrup on pancakes. Then he looked at me like I’d betrayed him for not giving it to him before," she tweeted.

Another Twitter user shared a photo of her little one's similar reaction to that first taste of pizza glory.

Still others likened the little girl's newfound devotion to pizza to that of a religious experience.

I don't know about you, but this photo reminds me of that viral video of a little boy trying bacon for the first time — and totally losing his cool, as HuffPost reported. Just over two years later, the video has accumulated more than 7.4 million views on YouTube. "My son, Easton, tried bacon for the first time Christmas morning and his reaction was priceless!" Tyler Beach wrote in the video's description. Check it out for yourself!

Little Easton closes his eyes as he fully takes in the savory goodness that is bacon. Best. Christmas. Present. Ever. Throughout the 1-minute clip, the little guy exclaims, "Bacon!" as members of his family burst out laughing. "Ohhh!" he says at one point, following up with squeals of delight. So freaking cute!

After a bit, Avirgan chimed back into the commentary with a special note. "While I appreciate the love this is getting I notice that a few Chicago pizza shops have tweeted it and I’d like to take this opportunity to remind you that whatever it is you’re subjecting your customers to — it’s not real pizza," the original poster/dad wrote. Oh no, he didn't.

Let's just say that people have strong opinions on either side of this pizza debate.

I remember how exciting it was to introduce new foods, one by one, to my three kiddos when they started on solids — which, according to Parents, is typically recommended between the ages of 4 and 6 months. It was hilarious to see if they would wrinkle their noses at pureed green beans, or simply, chow down like they were the best thing ever. With each of my children, I especially loved watching them try ice cream for the first time. Without fail, their first reaction was utter shock at how cold the frozen treat felt — immediately followed by diving in without abandon.

So here's my takeaway from this dad's wildly-popular tweet: The next time your child tries a new food, be sure to keep your camera handy. Because who knows? It could very well be the next viral sensation.