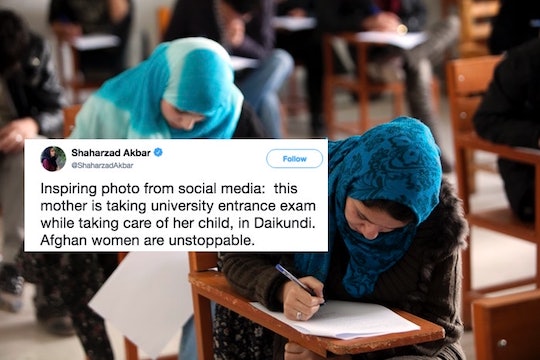 We all know that females are strong as anything, but sometimes a little extra proof can go a long way. This week, a photo of an Afghan mom breastfeeding while taking an exam went viral for just that reason. She symbolizes just how powerful and determined women are and how they sometimes make things like getting an education, in a war-torn country, with an infant in tow look easy, even when we all know how hard it likely is.

The photo was taken at Nasirkhosraw Higher Education Institute in Nilli city in Afghanistan's Daykundi province, according to BuzzFeed News, during an entrance exam for the university, called the kankor exam. A professor, Yahya Erfan, a professor who was monitoring the exam, took the picture of 25-year-old Jahan Taab, who got up from her desk when her baby started to get fussy, according to BuzzFeed News. She sat down on the floor, breastfeeding the infant, and kept filling out the answers to the test.

Erfan posted the pictures to his Facebook account, now made private, because he was so moved by her resilience. He told CNN, "It was amazing and all of the classmates were in admiration of her." Erfan added that she passed the exam with 152 points and is now considering attending.

That's where the power of the internet comes in, since Taab reportedly told the professor that she's worried about the tuition fees (about $145 or 10,000 Afghani) and the fact that her village is about eight hours away from the university and there's no road for cars. She would have to figure out a way to attend and care for her three children at home, according to Erfan's statement to the news outlet.

The Afghan Youth Association, based in the United Kingdom, has set up a GoFundMe account to help Taab pay for the school's fees and then figure out the distance later. The group explained on its fundraising page:

She doesn't only face the financial challenges but also a difficult boundary to educate herself in the Afghan society. The money we raise will be handed to Jahan Taab in person.

That Taab has even considered going to school despite her family's financial situation is a big deal given that women in Afghanistan often struggle to make school happen for them. According to the Human Rights Watch, young girls are often kept home because of a cultural attitude that they don't "merit" education and a third of girls marry before 18 years old and then never continue their schooling.

Although the Afghan government and international human rights organizations have pledged to make more room for girls in school since overthrowing the Taliban in 2001, the reality is that discrimination still exists, according to a report last year from the Human Rights Watch. There are, according to the organization, 3.5 million children out of school and 85 percent of them are girls.

When it comes to literacy, the situation is equally dire — 37 percent of girls are literate compared to 66 percent of boys. So the fact that the 25-year-old Taab qualifies for higher education at a private university, kids, husband and all, is really something to celebrate and spread around. More like this, please.

Taab, and the other women who take the kankor, are a sign that things can and will continue to change for the better. In addition to her taking the exam alongside her child, the university she was applying to was one of the first in the Daikundi province and offers reduced rates for women applicants, according to the British and Irish Agencies Afghanistan Group.

While government and nonprofits are a part of that change, regular women like Taab who keep going despite all of the other obstacles in their way are going to be the real catalyst for change. I wouldn't put it past her to find a way to make all of it work — discrimination, tuition fees, unpaved roads, and childcare are nothing compared to a determined woman.