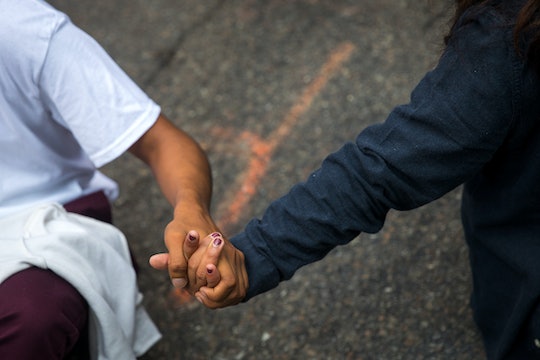 This Viral Photo Shows The Horrifying Reality Behind The DACA Repeal

The Trump administration, via Jeff Sessions, announced on Tuesday that it will be terminating the Obama-era program known as the Deferred Action for Childhood Arrivals, or DACA. Sessions and Trump have both incorrectly stated that immigrants are hurting the United States and that the country needs to deport criminals and people who are not paying taxes. But what they both fail to admit is that DACA doesn't include those people. DACA recipients are thoroughly vetted, and many of them are young people. The below viral photo shows the horrifying reality behind the DACA repeal and those protected, known as DREAMers. These people are the children of immigrants and without DACA, they could lose the only home they've ever known.

President Obama enacted the DACA policy in 2012, providing safe haven for children of undocumented immigrants who entered the country while underage and allowing them to work or study in the U.S. without fear of deportation. If Trump's plan succeeds, the program will be completely phased out by early March 2018. This will leave Congress just six months to put into place new protections for DREAMers, or leave their fates to chance.

According to The Guardian, no new applications will be accepted for DACA and those currently protected by it will lose their legal status as early as 2020, with permits beginning to expire in 2018. Unless Congress manages to come up with legislation to protect these young immigrants — many of whom are children or young people in school and college — they will be deported.

Immigrant rights activists are speaking out about the cruelty of the proposed repeal and numerous protests have broken out across the country. As seen in the photo below taken by Lauryn Gutierrez of Rewire News, many of those protesting are children who could lose their home without DACA if Congress doesn't enact protection for DREAMers.

Of course, not all current and future DREAMers are young children, but a good deal of them are. According to the American Immigration Council, roughly 426,329 undocumented immigrants between the ages of 5 and 14 are capable of meeting the requirements for DACA protection.

It is true that many of the DREAMers have transitioned into adulthood, but this doesn't mean that they have lost their need for protected status in the U.S. Voices from both the public and private sectors have spoken up for the protection of DREAMers of all ages. According to The Washington Post, Microsoft recently stated that it would go to court and defend its 39 employees who are DREAMers. Additionally, attorneys general from both New York and Washington state have promised to sue if DACA is dissolved.

Many DREAMers themselves have also spoken up about their uncertain fate. One such person, 24-year-old Joel Cruz from Visalia, California told the Daily Beast that DREAMers are just like anyone else in America:

We’re just Americans! I feel like I’ve been an American all this time ... I’m an AMERICAN, and I don’t need a piece of paper or a judge’s approval to confirm it. I am because that’s what’s in my heart.

Christopher Babb of Hurst, Texas is a 41-year-old stepdad to two DREAMers. He also spoke with Daily Beast and shared the importance of protecting young children:

I want both of my stepchildren to have the life I, and their mother, never had. They're both very intelligent people of excellent character. They're both deserving of having a life in this country. They've shown it through their actions.

While both adults and children alike are in danger if DACA is terminated, children are the most vulnerable. These are young people who may not know any homeland other than the U.S. and therefore have nothing familiar waiting for them on the other side of deportation. There is still time for President Trump to choose compassion and change his stance on DACA. Only time will tell where his sympathies lie.