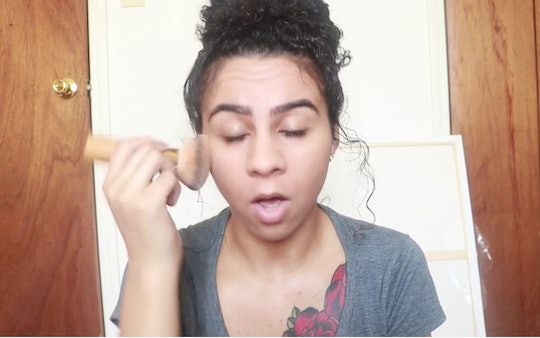 As the one-week anniversary of the latest school shooting approaches, it's clear that this country is at a breaking point when it comes to gun control. Because American citizens are fed up. Survivors of the Marjory Stoneman Douglas High School shooting — which killed 17 students and teachers on Valentine's Day — are organizing a March For Our Lives on March 24. People are sending checks made in the amount of "thoughts and prayers" to politicians. And most recently, a popular YouTube vlogger has created a genius video speaking out against gun violence. And honestly, this viral "thoughts and prayers" makeup tutorial should be required viewing.

YouTuber Sailor J is clearly pissed about the latest mass shooting in Parkland, Florida. If you're not familiar with the 21-year-old feminist bad*ss, she first gained widespread attention in October after she released some seriously funny (and satirical) makeup tutorials, according to Themarysue.com. (When you get a moment, please check out "GETTING A MAN 101," "Contouring 101," and "Making Yourself Attractive." You won't be sorry.) Sailor J's latest masterpiece dropped on Feb. 18, and it's titled, "T & P Makeup Look." The young vlogger begins her video by introducing the line of makeup she'll be working with. "Today I thought I'd do a 'thoughts and prayers' makeup look," Sailor J explains. "It isn't a new line. It's been out for a while. You probably see a lot of rich, indifferent people in congress tweeting about it often — usually after a national tragedy like the Parkland shooting."

Whoa. Things just got real, and fast. So how does one accomplish a "thoughts and prayers" makeup look, you ask? It's pretty much everything you could have hoped for and more.

"As you can see, I have all of my stuff here. I have my phone. I have my brushes. And then I have the actual makeup line," Sailor J says. *Points at an empty space of carpet* "So like we have highlighters right here, contour kits right here, mascara, eyeliner, blush." She then proceeds to do an entire makeup tutorial with literally nothing. And it's everything.

OK, so we're going to take this foundation right here. It's called, "If you're white, it's a mental illness and if you're brown, you're a terrorist." Put that on the back of our hand, here. And if you can't see it, it's probably because you're not strong enough in the spirit.

Sailor J then introduces viewers to a special shade of mascara called "bulletproof black." She explains, "It's supposed to match the vest that we're going to have to start putting on our children if we want them to make it past the sixth f*cking grade." Ouch. I want to laugh because this tutorial is literally as helpful as sending "thoughts and prayers." But I also want to cry because it's so freaking true — and terrifying.

Next, the sassy YouTuber whips out a highlighter to define her cheekbones. "It's called 'money' because that's all our country f*cking cares about and it shines," she declares. "I'm f*cking glistening. I am a new woman — a rich woman."

Lastly, Sailor J liberally applies blush in the color of "the blood of our children." She elaborates on her choice, explaining, "Because it's what we're bathing in these days. I'm just gonna dab that here so we look flushed with embarrassment like the rest of our country."

So as you can see, this line is incredible. If you don't think so, it's probably because you need to get right with the lord. Just embrace the line because nothing stops a bullet like thoughts and prayers.

Honestly, I had no idea what to expect when Sailor J's video started — probably because I had never watched her before Tuesday. But she just gained me as a follower. And it seems like I'm not the only one.

"I never liked a video so fast," one YouTube user commented.

"Thank you for your unflinching honesty in all things. The world needs more people like you to call others out on their bullsh*t. Keep serving the shade, queen!" another person wrote.

"I'm crying this needs to be put up in Times Square, thank you J﻿," yet another person chimed in.

Seriously though, the bullsh*t has to stop. This preventable killing of innocent people is not acceptable. Acknowledging that we as a country — and as a culture — have a gun problem is the first step. I think we might finally be there. And on its heels? Banning assault rifles. As Eugen Robinson wrote in an opinion piece for The Washington Post back in 2016, "Banning them would not end mass killings, but it would mean fewer deaths. If we do not act, the blood of future victims will be on all of our hands."