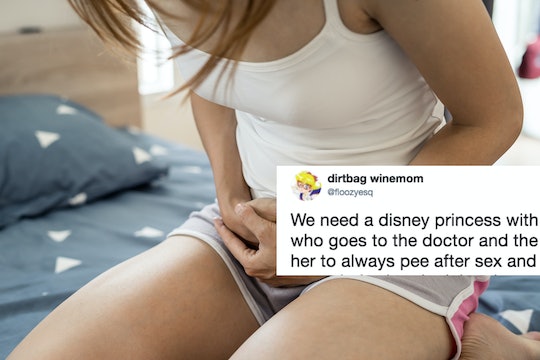 Twitter memes are meant to be funny, but sometimes, a joke can also highlight a serious concern. That's what happened when this viral tweet about chronic UTIs shined a light on the lack of research into women's health issues, while also giving everyone a bit of a laugh. Twitter user @floozyesq hopped on the "We need a Disney princess" bandwagon, a meme that was meant to be a call for more equal representation in media before an unfortunate hijacking by Keystone Planned Parenthood caused it to devolve into a parody of itself. But her complaint needs to be heard, because it's long overdue.

"We need a disney princess with chronic UTIs," she wrote, whose doctor gives her the only piece of advice they have to offer: "pee after sex." As many as 80 percent of women will get at least one urinary tract infection in their lifetimes, according to the Washington Post, and 20 to 30 percent of them will suffer from recurrences. Presumably, most of those women have been told to urinate after having vaginal intercourse in order to flush any bacteria out of their urethras, and most have also been wiping from front to back since they were first potty trained, so why are UTIs still so common?

For many, UTIs aren't just a minor inconvenience, either. Women began replying to the original tweet to commiserate about their own experiences with bladder pain, with some sharing the incredible lengths they had to go to in order to find relief. One said her doctor has to pump medication directly into her bladder every four weeks, and another said that only by combining a powerful transdermal narcotic patch with another narcotic, and a medical marijuana derivative, was she able to get her pain "down from suicidally bad to liveable."

Another woman asked for advice because she was "going broke buying AZO Standard," a urinary pain relief treatment that's only meant to be taken for two days at a time (it also stains your pee, skin, and contact lenses, and doesn't work for everyone). Others on the thread recommended some unconventional remedies such as aloe vera, Benadryl, a supplement called D-mannose, which got quite a few shout-outs, but just remember that dietary supplements are largely unregulated and potentially dangerous, so you should always ask your doctor before starting any course of treatment, over-the-counter or not. Of course, the whole point of this conversation is that some doctors don't know what the hell they're talking about, so good luck with that.

Chronic UTIs aren't the only area of women's health that needs more attention, either. According to the Office on Women's Health, polycystic ovary syndrome (PCOS) affects one in 10 women of childbearing age, but the exact cause is unknown, and there's no cure. The federal agency offers sufferers some helpful advice for dealing with it, though, like losing weight, getting electrolysis, or taking drugs that aren't FDA-approved. Endometriosis, another condition that can cause pain and infertility, also has no known cause or cure. The Mayo Clinic suggests ibuprofen and warm baths as treatment, and if that's not enough, perhaps a hysterectomy.

Lack of knowledge about the female reproductive system also affects women's sex lives; the anatomy of the human clitoris wasn't discovered until 1998 (by a woman, TYVM), and it's still not widely known. Meanwhile, nobody can agree on whether the G-spot exists, and female ejaculation is treated like Bigfoot, only instead of claiming it's just a bear, they're saying it's pee. (it's definitely not pee).

And even when women have the same health problems as men, they're treated differently. Women's pain is chronically dismissed by health care professionals, they're not warned about gender-specific signs of heart attack (women experience very different symptoms from men), and they're rarely included in clinical trials for drugs they'll eventually end up being prescribed. Even preclinical trials tend to use only male animals, according to the National Institutes of Health. This is ridiculous. Women are half of the population; it's time medicine started including us.

More Like This
Mom On TikTok Asks Daughters Why They Want To Be Boys & Same, Girls, Same
Viral Hives In Children: What Doctors Want You To Know
Does The FDA's Plan To Limit Lead In Baby Food Go Far Enough?
14 Recipes For Sick Kids When Everyone's Tired Of Canned Soup & Crackers
What Parents Are Talking About — Delivered Straight To Your Inbox