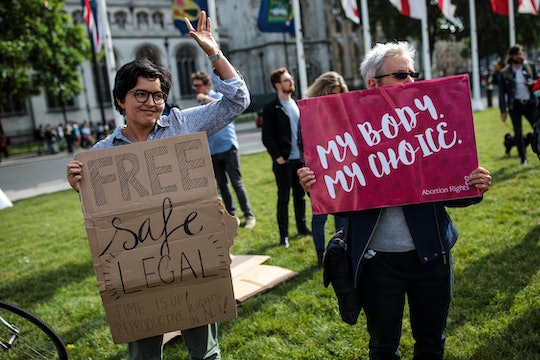 This Viral Tweet About Regulating Women's Bodies Is A Must-Read

If you've been paying attention to the news at all within the past several weeks, then you've probably spotted headlines containing the phrases "abortion ban" and "heartbeat bill." That's because states are passing laws left and right in an attempt to strip women of their right to a safe and legal abortion. It's complete bullsh*t — considering no one would even dream of passing legislation controlling a man's body. Which is why this viral tweet about regulating women's bodies is a must-read.

Fun fact: In 2019 alone, eight states have passed laws restricting abortion, according to The New York Times — the most recent of which went down on May 17 in Missouri — when the state's Republican-led legislature passed a bill banning abortions at eight weeks gestation. The only exception is in the case of a medical emergency, during which the mother's life/bodily function is in danger, USA Today reported. Rape and incest are not exceptions.

Earlier this month, Alabama and Georgia passed two of the most restrictive abortion bans in the nation. The Alabama State Senate passed House Bill 314, which bans nearly all abortions — with no exceptions for rape or incest, according to CBS News. Governor Kay Ivey proceeded to sign the bill into law, effectively banning all abortions except when they are "necessary in order to prevent a serious health risk" to the woman. Over in Georgia, Gov. Brian Kemp signed a bill that would make abortions illegal if a fetal heartbeat can be detected, according to USA Today. It does include an exception for rape and incest, if the pregnancy is 20 weeks or less and a police report is filed about the rape/incest.

Which brings us to this viral tweet. On May 20, a Twitter user named Brad Betts made a slow-clap-worthy point about these recent attempts to ban abortion. Since posting, his tweet has managed to attract more than 612,000 likes. And it isn't hard to see why.

I mean, it's 100-percent true. Logistically speaking, it would make so much more sense to legislate men's bodies in order to prevent unwanted pregnancies — and therefore abortion.

The responses to Betts' tweet were pretty spot-on, as well. "Require mandatory vasectomies at puberty that can be reversed with a note from the partner indicating that she wants children," one Twitter user, "Rapture's Daughter" suggested. "Abortion problem solved. (note, this is not my idea originally but once it was suggested I've embraced it.)"

Another Twitter user wondered in this situation, "Who pays if anything goes wrong?"

To that, Rapture's Daughter simply replied, "Who pays now?" Yet another Twitter user urged, "SAY IT LOUDER FOR THE MEN IN THE BACK."

For the record, this isn't the first time someone has pointed out the absurdity of abortion bans in this manner. In response to Georgia's abortion ban, Rep. Dar’shun Kendrick — a Georgia Democrat — introduced a "testicular bill of rights" package. It was a tongue-in-cheek response, obviously, meant to show how absurd regulating women's bodies should seem in comparison. Here's what was included in Kendrick's five-point plan, according to The Washington Post. It could:

I mean, it's only fair, right?