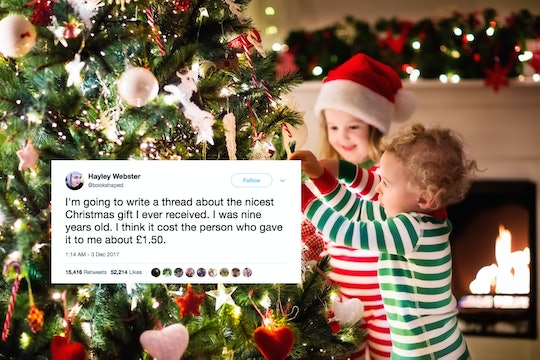 Holiday shopping can be extremely daunting for parents, especially for those who feel pressure to snag the most popular toys for their kids. Each year, there are a few "hot" and expensive toys on the market that are billed as must-haves for kids, despite the fact that children typically could care less about a present's monetary value and its marketability. Not to mention a lot of people can't afford to buy pricey gifts, while others don't have the time to stake out toy stores for restocks. So, if you're worried that you won't be able to buy your kid the must-have toy of the season or if you simply don't believe in flashy gifts, you'll likely love this viral twitter thread about what makes a gift truly special. Hint: it has nothing to do with money, and it will definitely make you cry.

On Sunday, a writer by the name of Hayley Webster took to Twitter to share a very important lesson she learned about gift giving when she was 9 years old. The thread, which has been retweeted more than 14,000 times, is being hailed as a crucial reminder to people who believe the value of a present lies in its price tag, a sentiment Webster's beautiful tweets have seemingly debunked.

According to Webster, the best and most meaningful gift she ever received cost £1.50 pounds, which is equivalent to about $2 dollars. Webster was obsessed with the Snowman movie at the time, and she loved the film's soundtrack. So, when her father's girlfriend gifted her with the piano sheet music for "We're Walking In The Air," one of film's songs, so that she could play it herself on the piano. She was overjoyed beyond belief, but, most importantly, Webster felt "seen" by the special present.

Webster said of the important gift, according to Twitter:

I had been working out how to play it myself, but I couldn't get it quite right. And there it was, in an envelope, just for me. I played it and played it and played it. It felt like the first time somebody had actually SEEN me ... It was the nicest thing, the loveliest, kindest, small, lovely thing. It made a difference to me, a huge difference. I remember it every year, every single year.

The moment was especially transformative for Webster because that particular Christmas season had been a tough one. Webster and her then-5-year-old sister were dealing with their parents' messy split and their mother's erratic behavior, among other issues. Prior to receiving the sheet music, Webster said she had gone out of her way to make sure her little sister's holiday cheer wasn't spoiled by their parents' instability by giving her sister festive gifts to help keep her spirits up.

I made my sister a card every day from Santa's elves and hid little gifts about the house, little glitter footprints, bought beautiful soaps from the gift shop in town in the shape of sea shells, and bells and apples using my savings, and wrapped them for her.

Webster's kind actions towards her sister didn't go unnoticed by her father's girlfriend. Webster recalled her dad's partner saying, according to The Independent:

One weekend, just before Christmas, she said to me, 'You've made Christmas really magical for your sister, you really have.' And I puffed up, all proud and happy. Then she said, 'It seems such a shame nobody does that for you.' I didn't really understand what she was saying.

Although Webster was happy to go out of her way to make her little sister feel special, she also reveled in the fact that someone had done the same for her. Webster's father's girlfriend made sure she felt loved and important that Christmas, which is what she remembers all these years later. It just goes to show that the meaning behind a gift can easily trump its monetary value.

... She taught me Christmas, is nothing to do with showing people you love them with big money spends. For me, it will always be about giving people what they need; attention, kindness, love. And when that happens to me, when people do that for me, it literally lasts as warmth my whole life. Notice people. Show them they matter. It's the best advice I could ever give anyone. Not just at Christmas. *cue the cheesy inspirational music*.

Unsurprisingly, many people, including J.K. Rowling, found Webster's tweets to be very moving:

Although there's nothing wrong with buying your kid a popular gift, it's also important to keep in mind that there are so many other ways to make them happy this holiday season. Most people, young and old, are just hoping to be "seen" and appreciated during what can be a very lonely time of the year, especially for families that can't afford lots of gifts. The good news is that making someone feel loved is pretty easy and inexpensive to do — it sometimes just takes a tiny bit of creativity.