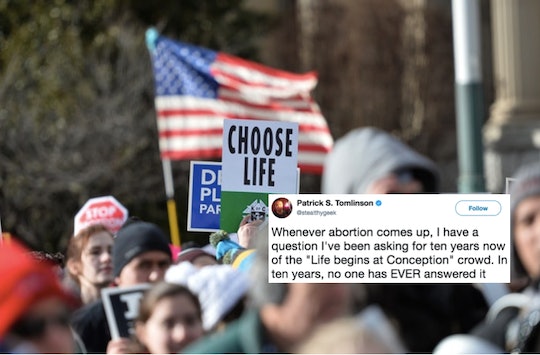 There are very few political topics as controversial as that of abortion. It's one of the few issues that people feel extremely passionate about, and sometimes even base their entire votes on. Generally, people either identify as being pro-life (against abortion) or pro-choice (wanting a woman to be able to choose what to do with her body). While there are many discussions to be had on the debate, this viral Twitter thread totally destroys a classic anti-abortion argument.

More Like This
The Obamas’ New Family Rule? Get Vaccinated If You Want To Hang Out With Us
Every Adorable Photo Of Prince Louis
Josh Duggar's Family Has Spoken Out As He Faces Child Pornography Charges
These 35 Photos Of Prince William & Kate Middleton Are As Close To Royal PDA As It Gets

Twitter user Patrick S. Tomlinson, an author and op-ed writer, decided to pen a fairly long Twitter thread Monday afternoon, calling out an argument constantly made by pro-lifers. As he pointed out, many anti-choice advocates like to argue that they believe life starts at conception, so abortion, to them, is murder. Of course, the merits of this argument have been debated for years, but still, anti-choice members rally around this belief, using it to explain their stance on why they believe abortion should be illegal.

However, Tomlinson has now completely shattered that long-held notion, and his Twitter thread is nothing short of brilliant and thought-provoking.

The nine-tweet Twitter thread delves into what exactly it means to assume that life begins at conception. "Whenever abortion comes up, I have a question I've been asking for ten years now of the 'Life begins at Conception' crowd," Tomlinson begins the thread. "In ten years, no one has EVER answered it honestly."

He then poses an interesting question, asking those reading to ponder what they or what they think pro-lifers would say if they were forced to choose between two extremes. The thread reads:

Basically, Tomlinson is presenting the pro-life movement with quite a moral quandary. They might like to say that the life of a fetus — however old — is as of much value of that of any other human. But, when pressed with this question, they would never put that value of embryos above any other, living and breathing life.

Those following Tomlinson's thread had mixed reactions and answers to his question:

Despite the divided response, when the United States is at a crucial crossroads in terms of women's rights, Tomlinson's thread is especially poignant. Earlier this month, it was reported that the United States government has officially declared that life begins at conception with the new draft of The Department of Health and Human Services' strategic plan for 2018. According to Vice, the new draft reads:

HHS accomplishes its mission through programs and initiatives that cover a wide spectrum of activities, serving and protecting Americans at every stage of life, beginning at conception.

This attempt to politicize the United States government with anti-choice rhetoric cannot be overlooked, and well-known gynecologist Jen Gunter wrote extensively about how this could effect women. As she wrote on her blog, the government now "believes that certain religious beliefs are more important than health care." She added, "this could apply to contraception, abortion, vaccines, addiction medicine, sexually transmitted infection screening, and transgender care just to name a few."

Many pro-lifers have argued that taxpayers are footing the bill for abortions, but that simply isn't true. In 1977, Congress passed the Hyde Amendment, which basically "means Medicaid cannot cover abortion even when a woman’s health is at risk and her doctor recommends she get an abortion," according to Planned Parenthood. Women are the ones being forced to pay up for other people controlling their bodies. And while the pro-lifers have long debated that "life begins at conception," that has yet to be scientifically proven.

So, at the core of the "life begins at conception" belief, Tomlinson tweets, is pure misogyny. And truly, as the Trump administration continues to attempt to do away with women's rights — such as doing away with equal pay mandates and further shaming sexual assault victims — it's important for citizens to call out sexism when they see it.

For many, abortion is not an easy topic to discuss, but it's certainly an important one. And that's why Tomlinson's viral thread is a must-read. The abortion debate is long from over, but this specific anti-choice argument might soon be.