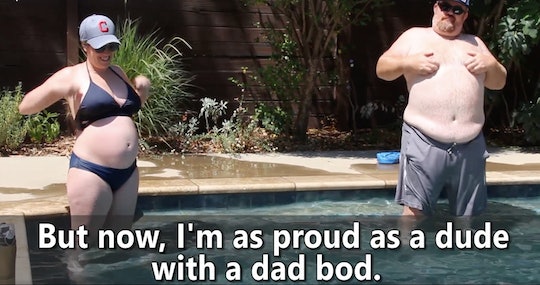 OK, party people. Ready for a good belly laugh? A big 'ol pregnant belly laugh? Sit back, relax, and just take a couple minutes to enjoy this viral video about how pregnancy makes you feel like a man will have women everywhere just howling.

This hilarious video, shared on Facebook last week, is the latest from the comedy group, Hot Sh*t Machine, entitled MaterniDbag. In it, actresses Maribeth Monroe, Kate Mines, and Katie Nahnsen, describe how pregnancy can make women feel, well... like a man every once and awhile.

And when you think about it, it's totally and completely true. All the burping, farting, taking up way a bit too much room in public settings, snoring... Move over men, 'cause pregnant ladies are gonna give you a run for your money.

Also, pregnant ladies aren't afraid to eat. In fact, they'll eat your food, their food, then order more, as this viral video so accurately shows. Hey, pregnant ladies are growing another person, so give them a break if they feel a little famished, OK? And dudes, have you ever grown an eyeball or a pair of limbs in your belly? If you have not, I advise you to shut it.

The video was posted about a week ago and was written and directed by Monroe, according to HuffPost. As she told the outlet, the idea came from honest conversations with her pregnant friends as they discussed changes and challenges with their new bodies. In an interview with HuffPost, Monroe said:

Pregnancy is not for the faint of heart — let's just put it that way. And, if most men ever had to go through what most women go through during a typical pregnancy, they might not live to tell the tale.

Case in point, the man flu is a thing, as CNN has investigated. Or, take a look at this poor sucker, who wore a machine around his belly that simulated labor pains, posted by BuzzFeed's Try Guys. He's literally begging for help as a nurse looks on laughing. Granted, it is hilarious.

When this viral video hit, two of them where still pregnant and only had give birth, according to HuffPost. Additionally, all three of them were expecting their first baby. And, people seem to like it. Since the video was posted on Sept. 19, it has received over 25,000 views, and the number is still growing. And judging from the video's comment section, it sure looks like moms are loving it, with tons of shares to like minded friends.

Another fan said, "This is so damn true! Hahaha!"

This mom reminded her pregnant girlfriend that her "man-spread game is legit af!"

So, if you've ever felt kinda like a dude during your nine months of pregnancy, you aren't alone. Embrace it. Love it. Celebrate it. *Burp*