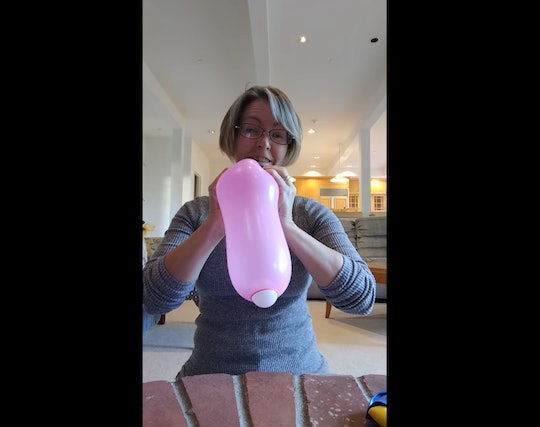 Let's face it: Childbirth education classes have a tendency to be incredibly boring. Not to mention awkward. However, it's now a known fact there's at least one childbirth educator — Liz Chalmers, owner of the Puget Sound Birth Center in Seattle, Washington — who is decidedly not boring. In fact, I have a feeling her classes might be some of the most in-demand offerings in the Seattle area, following an incredibly popular simulation she shared on social media. This viral video is a spot-on demonstration of how contractions work, and you simply have to see it.

As Chalmers explains on Facebook, she initially created the video for her niece, Charlotte, who is currently working toward becoming a childbirth educator in New Zealand. Chalmers expertly simulates the process of childbirth using, wait for it, nothing but a balloon and a ping pong ball. In the video, the childbirth educator explains she got the idea from a workshop called “Stomp Out Boring Childbirth." The video — which was posted on Oct. 27 — unexpectedly went viral on Facebook, attracting 9,600 likes and over 22,000 shares so far. And it's pure genius. Check it out for yourself, in the video below!

The demonstration begins with two simple objects: A balloon and a ping pong ball.

To set up the demonstration, Chalmers stretches out the balloon a bit with her hands and then carefully squeezes the ping pong ball inside. Next, she blows up the balloon about halfway, allowing the ball to settle at the top of the "cervix," and block the opening.

"I show people how if you just squeeze the side of the balloon like this, not much is happening to the neck of the balloon, here, and it's not opening very much" Chalmers explains. She continues:

These are the Braxton Hicks contractions that are just practice contractions, that are more and more common towards the end of pregnancy. But they don't do all that much to what's happening with the cervix.

Real contractions, on the other hand, happen toward the top of the uterus, Chalmers explains. "It's the muscle fibers at the top, here, getting shorter and thicker, which squeeze the top and then pull up on the side of the uterus, here."

In class, she has students squeeze the balloon and then let go, squeeze and then let go — just a little bit at a time, like real contractions would. "And you can see here how we're getting that effacement, or thinning, of the cervix down here," Chalmers says. "And not much dilation is happening while we're still working on shortening the cervix, here."

Chalmers explains this is a lot of the work that's going on in early labor: Thinning of the cervix, versus dilation. "One we get to much more effaced, much more thin, then we're going to start dilating the cervix, there," she says, as she keeps up the "contractions" on the balloon.

A lot of people get kind of nervous at this point. It's like, 'Oh no, I don't want to push!' So we always have a bit of a joke. It's just like actual labor, where you'd be like, 'It's okay, just breathe. Do it gently. You're stretching beautifully. And then just give it one more push, and the baby will be here.

"It's always just an absolute riot in class," Chalmers says, after the ping pong ball — err, "baby" — finally shoots out of the ballon/birth canal. She adds:

Everybody laughs and has a blast with it. And I always tell the class, 'Take it to your young kids' — if they already have kids and this is a refresher class — 'show it to your older kids, because they think it's kind of funny, and that's how babies come out.' And if you're at a boring office meeting, take it along to that, too.

Ha! That would definitely be a unique office meeting activity. (Count me in!)

Aside from the vast numbers of likes and shares, the feedback on Chalmers' video has been overwhelmingly positive. "This is BRILLIANT!!! How has this not been used before? Thank you, thank you .... It does an amazing visual for 'what happens to the cervix?'" Another commenter shared that they incorporated Chalmers' demonstration at a celebration for their baby's upcoming arrival. "We loved this so much we did this activity with all our friends at our first baby shower! Brilliant!"

My husband and I are in the process (not currently as I type this, I promise!) of trying for our fourth child. I think this method would be a fun/interactive way of explaining childbirth to our older children. And heck, even if they don't quite get it, it involves shooting a ping pong ball out of a balloon. Which is a win in my book. Thanks so much for sharing this amazing idea!