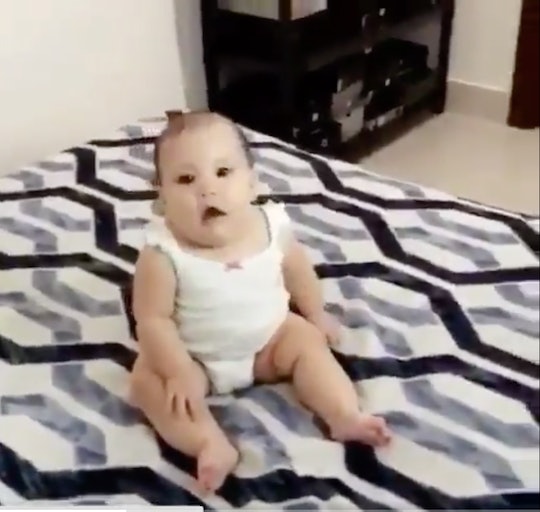 Unless you've been hiding out in a cave trying to escape the disaster that is 2017, you've probably head the song, "Bodak Yellow," by Cardi B. Well, if you somehow haven't, the song just officially reached the top spot on the Billboard Hot 100, and pretty much everyone has been jamming out to it. Including, it turns out, babies. Yeah, this viral video of a baby listening to "Bodak Yellow" will probably make your ovaries implode, in the cutest possible way.

Obviously, anything babies do is already really freaking adorable, but this particular baby gives whole new meaning to the word "cute." In the video, a little baby is seen watching and listening attentively as "Bodak Yellow" blasts from the TV. Honestly, it kind of looks like the little one is quite literally entranced with the song and music video, so much so, that when the person filming turns the song off, the baby starts to cry. Of course, it's just about the sweetest little cry you've ever seen, but don't worry, it gets better.

After letting the baby get a little upset that her favorite song stopped, the person filming turned it back on, and the baby's eyes widened with excitement. And truly, the world will never be the same now. Don't believe me? See for yourself:

See? It's almost unfair how cute that baby is.

And seriously, there's no denying the fact that that baby has great musical taste. As stated above, "Bodak Yellow" recently topped the Billboard Hot 100 this week, ousting none other than Taylor Swift. Of course, Swift being Swift, she sent Cardi B flowers to congratulate her achievement. But that's beside the point, although successful women building each other up instead of tearing each other down should always be newsworthy in my humble opinion.

It's rare for a female rapper to experience such success, especially when they're a new artist. In fact, as People pointed out, Cardi B is "the first female rapper to top the Billboard Hot 100 chart without a featured act on her single “Bodak Yellow.” So really, this baby's reaction to having the song turned off is totally understandable. After all, how often is it that one female role model is replaced on the charts by another female role model who is also making history? Hint: not very often, unfortunately.

Seriously, no one would ever really think that a bop like "Bodak Yellow" would provide such entertainment to a baby, considering that it's usually softer tunes such as lullabies and classical music that enchants babies. But for some reason, "Bodak Yellow" has proven itself to be truly transcendent by mesmerizing this little girl. Likely, Cardi B never imagined that her music would be so popular among infants, but nevertheless, it's happened.

And honestly, thank goodness. Seriously, let's watch that video one more time, just so we can really absorb it:

OK, now obviously you could probably watch that video on repeat for three days straight and not get sick of it, but it's also a great way to celebrate the rapper's success. The 24-year-old is fairly new to the music game, after appearing on Love & Hip Hop: New York in 2015 and releasing music shortly after. It's no secret that Cardi B is a breakout star, and this baby's love for her music is no longer a secret either (thankfully).

But, if there's one thing that this sweet little girl has taught us all, it is this: literally everyone likes to jam out to "Bodak Yellow," and that's pretty awesome. And if you want to go watch the baby again (or maybe five more times), go right ahead. I don't judge.