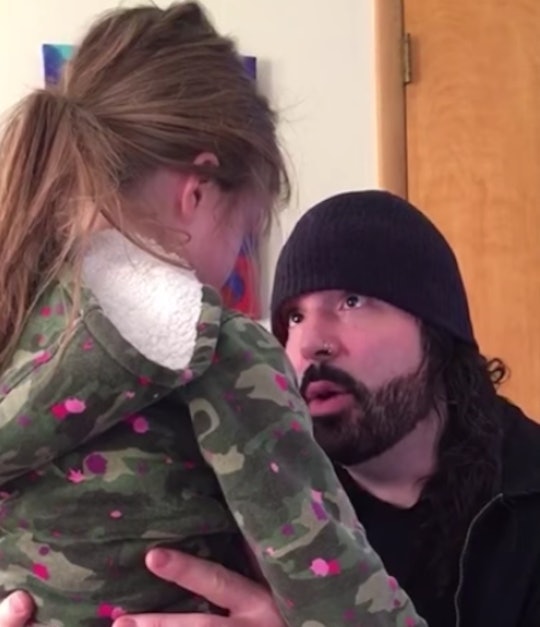 If you're a parent of a young child, then you probably know how hard it can be to stay calm during a meltdown. Tantrums and big, overwhelming feelings are a totally normal part of life when you're raising little ones, but sometimes even the most patient and understanding parent can feel at a total loss for how to handle an angry or upset child — and on our not-so-patient parenting days? Well, we can easily end up totally losing it, too. But this viral video of a dad talking to his daughter about her feelings perfectly illustrates the value of recognizing that what our children usually need from us in those trying moments is connection and guidance. And while it's definitely not always easy, this dad's loving words are a great reminder that, as parents, we have the opportunity to be our children's most important teachers.

The hugely popular video was posted Sunday on the Love What Matters Facebook page, and in the post's caption, the little girl's mother wrote that she had taken the video of her husband, Randy Gaines, talking to their daughter when she was feeling upset. And although it can sometimes feel easier to downplay or dismiss kids' reactions when they're acting out, Gaines instead chose to sit his daughter down and let her know that she was completely entitled to everything she was feeling.

That's actually pretty powerful advice, even for adults — so often we fall into the trap of thinking that we're supposed to always feel happy, or that being sad or angry is somehow bad or wrong. But as parenting expert Dr. Laura Markham explained in a post on her website, Aha! Parenting, by letting his daughter know that her feelings are totally fine and acceptable, he's giving her the chance to learn that she can actually accept "negative" feelings, instead of believing she has to push them away.

When empathy becomes our "go to" response, our child learns that emotions may not feel good, but they're not dangerous, so she accepts and processes them as they come up, instead of stuffing them, where they just get uglier. She knows someone understands, so she doesn't have to yell to be heard. And when our support helps her learn that she can live through bad feelings and the sun will come out the next day, she begins to develop resilience.

But that wasn't the only valuable lesson Gaines had to share. As their conversation progressed, it became clear that, actually, his daughter was angry with him for calling her "Button" — a name she clearly didn't appreciate. Instead of defending himself though, or telling her to get over it, he acknowledged that she totally had a right to be mad if that's how she felt, and he apologized, promising to do better next time:

Unsurprisingly, Gaines' wife had only wonderful things to say about her spouse, and how dedicated he was as a dad. She wrote:

Moments like this make me fall even more in love with him ... No yelling. No screaming. Talking. Discussing emotions and why we have such feelings. HEALTHY outlets (walking, running, punching a pillow, etc) ... Getting down to the root of the problem. Setting boundaries, because feelings were upset. RESPECTING boundaries, to ensure it doesn't occur again ... Parenting which neither of us had growing up.

In the comments section, Facebook users had just as much praise, applauding Gaines for teaching his daughter that he respected her boundaries, while others said that they wished they had had someone to teach them how to accept their own feelings when they were little.

But it's not just about having a feel-good parenting moment: according to psychologist Dr. Jeffrey Bernstein, validation really does make a difference to children's well-being long-term. In an article for Psychology Today, Bernstein said, "validating your child’s or teen’s feelings is crucial to building his or her self-esteem and will promote solid, overall emotional health." And if your child is struggling with defiance or troublesome behavior, validation might just be the solution. Bernstein explained that defiance is "often the language choice of children who do not feel understood," yet one of the best ways to help them feel understood is by validating their feelings, and providing empathy — especially when they are acting in a way that doesn't make you feel particularly warm and fuzzy towards them.

We may not all have the ability to stay as relaxed and poised in stressful parenting moments as this dad (and, let's be honest, he probably has his not-so-awesome days too). But even attempting to bring a little more awareness and mindfulness to our parenting conversations every now and then can make a big difference — both now, and as they grow.