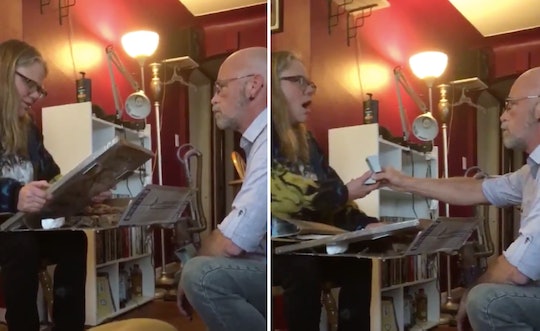 So, as just about everyone knows, the holidays are a pretty magical time. Whether you're celebrating Christmas, Hanukkah, or just enjoying some downtime, December is a pretty romantic and beautiful time. And now, this viral video of a divorced couple getting re-engaged after years apart is taking the internet by storm, and it's practically a Christmas miracle.

In a tweet shared by the couple's son, it was revealed that Jeffrey Agan Sr., 52 and Lorrie Agan, 51 were married for over 20 years before they got a divorce. According to BuzzFeed, the Agans were married from 1989 and had eight kids together until they got a divorce in 2014. According to Jeffrey Sr. and Lorrie's son, Jeffrey, who tweeted out the video, they took their time apart to "work on themselves." And now, three years after separating, it seems as if the Agans are ready to be together once again.

In the video, Jeffrey Sr. can be seen giving Lorrie a Chrismas gift, which turned out to be a poem he wrote for her. Lorrie reads the poem out loud:

Our love was there, it never left, though both of us felt lost. Faith intervened for me and you… so now I ask you Lorrie, once again…

And when she looks up, there's her man, down on his knee, asking his love to be his wife, once again.

Yeah, see, I wasn't lying when I told you that this was an incredibly romantic and sweet story. Speaking to BuzzFeed, 21-year-old Jeffrey explained how they got to where they were:

They originally got married in an electronics store, because they were too poor to afford a proper wedding. They fought, separated, divorced, and it tore the family apart. Each of us felt like we had to cope with the destruction in different ways, and on our own.

But, these past three years, the Agans have been doing a lot of soul searching on their own. According to Global News, Jeffrey Sr. "was a truck driver for 20 years, went back to school for nursing" and he also started hitting the gym, got fit, and "started writing poetry and spending more time with his grandchildren." Lorrie, according to Global News, "found peace in nature, meditation and self-empowerment."

And clearly, that time spent apart has been well worth it for them. Not only that, but the Agans are totally famous now. People on Twitter have been loving their sweet story and maybe it's just that time of year, or maybe it's the fact that everyone is running out of pie, but the tears just keep coming for this sweet couple.

Because truly, the Agans have a love story that has seen its fair share of ups and downs. According to People, the two first got married "in a local electronics store when they couldn’t afford a traditional wedding." The publication added, "While their union saw the birth of eight children, it was also plagued by intense fighting."

Jeffrey also told BuzzFeed that he and his siblings were nevertheless supported and spoiled by their parents, despite falling on hard financial times. Jeffrey Sr. and Lorrie "invested in our success and our futures at the expense of their own wants and needs," Jeffrey Jr. told the website. So, he made a GoFundMe in response to requests to create one after the post went viral, "so people can contribute to their wedding."

Oh, and if you watch the video closely, you'll notice that there's a child who almost gets in the way of the happy couple's big moment, before he's snatched back out of the shot. And for anyone who was concerned about the safety and well-being of said child, Jeffrey wanted to clarify that everyone is totally OK.

So, rest easy fam. Jeffrey Sr, and Lorrie are back together, the child is fine, and the entire Agan family is ready to celebrate this happy news. Congrats to the newly-engaged couple! Your love is clear to see.