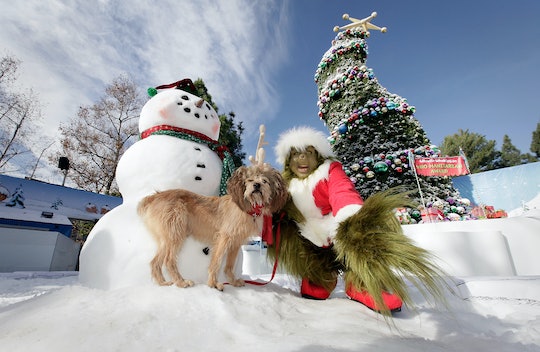 Forget the Jim Carrey/Benedict Cumberbatch debate that the new Grinch film prompted. Those guys are nothing compared to my new favorite green anti-hero. This viral video of a dog dressed up as the Grinch, eating ice cream will give you all of the holiday feels. And the Grinch video is only one of the many gems that you can find on this furry friend's Facebook page.

Gemma Johnson is a bulldog whose owner regularly dresses her up in hilarious outfits and poses her for social media. Most recently, Gemma's parents filmed a video of her eating ice cream in a Grinch outfit. "When the Grinch eats all of your ice cream," her owner captioned the post. Since it was posted on Dec. 14, the video has racked up more than 5 million views, over 102,000 shares and countless comments — just in time for the holidays.

The beautiful bulldog's many adoring fans commented their appreciation for her holiday spirit, praising the person behind the page for his or her dedication to making the world laugh. "You're at it again! I'm laughing so hard I can't respond... I love your silliness!" one person wrote. There's a lot to love about this video, that's for sure.

Other were impressed with Gemma's patience. "That is one talented Bulldog. Mine would never let me dress her up. So cute!" said someone else. Another offered to let Gemma come indulge at her place, writing, "I can’t take it! Gemma, you are the most precious grinch I have ever seen! You can come to my house and eat all my ice cream!"

Along with expressions of awe and wonder over Gemma, her fans were also seriously impressed with her camera crew. "I don’t know how you film Gemma without cracking up laughing! I’m dying," one such comment reads.

Gemma's green getup comes just in time for the holidays. Interest in the Grinch tends to peak around this time of year, which isn't surprising considering the iconic Christmas movie status of both the original cartoon version and Jim Carrey's take on How the Grinch Stole Christmas.

But The Grinch may be on a few more minds this year, in particular. A whole new generation is getting the opportunity to fall in love with the grumpiest guy in Whoville. The Grinch starring Benedict Cumberbatch came out on Nov. 9 and it is the perfect version of the classic tale for little ones and bulldogs alike.

Earlier this month, Kourtney Kardashian took her family to Universal Studios Hollywood and one of their most notable meet-and-greets was with none other than the Grinch, and her son Reign Disick had a very important question for the big guy, and it had nothing to do with the many voices that have embodied him on screen. No, Reign was more interested in the big existential question of Whoville: "Why did the Grinch steal Christmas," he asked, according to E! News. It isn't clear what the Grinch had to say for himself, but I have a feeling, considering Gemma's new video, that it had something to do with withholding ice cream.

The Grinch isn't the only Christmas costume that Gemma has put on this year, though. My new favorite comical canine was also dressed as an Elf on the Shelf who had a little too much to drink. That video is appropriately captioned "When your 'Elf on the Shelf' finds your beer." As you could expect, her many followers were laughing at that one as well and it, too, went viral coming in at 45,000 views.

Nothing gets me in the holiday spirit quite like little kids and dogs. Thank you, Gemma, and Merry Christmas!