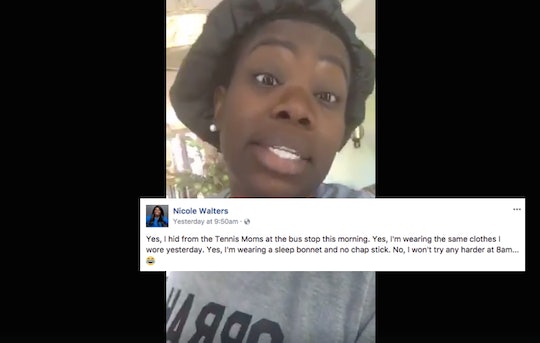 Sometimes, it seems like moms face pressure from all sides to be perfect. To be "Super Mom." To have their lives together, even though kids are unpredictable and can throw all sorts of curveballs into your plans. The people who often subject moms to some unrealistic expectations are, unfortunately, fellow moms. One mother, Nicole Walters, posted on Facebook on Thursday about that very issue. In a viral video, this "functional hot mess" mom, as Walters referred to herself and her parenting, described the pressures of dealing with other moms at the bus stop in the morning, and it's a pretty funny take on the relatable situation.

Walters has technically been a mom for three years, but the adoption of three daughters into her family just became official recently, according to Babble. She's also new to a suburban neighborhood, and in the past, the bus stopped at her family's mail box, so the bus stop thing is fairly foreign to her.

On Thursday, Walters shared a Facebook Live video of herself as she hid from her fellow suburban moms at her 6-year-old's bus stop, waiting it out while at least one "fancy" neighborhood mom made her way to the stop and back as Walters provided hilarious commentary from her house.

In the video, Walters talked about how hard it can be to feel like you don't have it together compared to other moms. She did it in such a funny, relatable way, however, that it's resonating with many, and the video went viral.

To emphasize her "hot mess" status, Walters conveyed that in the video, she kept it "all the way real" and was outfitted in a bonnet and an epic "Oprah wasn't built in a day" t-shirt — which she wore the previous day and grabbed off the floor to hastily get her child ready for school that morning. Come on, we can't all be paparazzi-ready before noon, right?

Walters made it clear that, although she was avoiding the other bus stop moms, she's not some sort of hermit who stays away from people at all costs. In fact, she said in the video:

I don't know if any of you guys are like me... I like people and I'm extroverted... I'm really a lover of people... but I also don't like people.

And a lot of moms can probably relate to that sentiment. It's not that Walters never wanted to see her neighbors — but she's not excited by the prospect of having to do it early in the morning, especially if it means putting on a bra first.

Walters' message in her video probably seems familiar to a lot of moms. She just doesn't want to deal with the looks and the gossip from her neighbors if she shows up at the bus stop not looking like she's ready to take on the day in a perfect outfit and hair-do, and that's a relatable feeling.

And for the record, her anxiety isn't totally unfounded. Walters made a joke in the video about how her neighbors judge her family when her kids do chores outside, according to POPSUGAR. As much as it was meant to be funny, it also made it clear that Walters isn't expecting her neighbors to keep their judgment to themselves. So instead of putting herself through it, she provided hilarious comments on the bus stop situation from afar while her nanny braved the challenge, complete with a blazer Walters lent her so she, at least, would look like she "had her life together."

And now that the video's gone viral, Walters has some other concerns — for example, that the "tennis mom" in question in the video may see it and know Walters was talking about her. But Walters isn't concerned. She tells Romper via email:

Yikes! That wasn't the plan! Haha! However, if she DOES see it — I'm so okay with that, cause then we can mutually stand at the bus stop in awkwardness.

Most importantly, Walters knows what's really important when it comes to parenting, and it's not how you look at the bus stop. She tells Romper:

Well I make no pretenses about knowing every single little detail about exceptional fancypants parenting. My bar on parenting starts with 'don't kill your kids' and ranges to Astrophysicist. I may not be able to do all the things to get them to the best range, but I will do my very best to expect and create excellence everyday.

Personally, I appreciate it when other women are honest about real life taking precedence over looking photo-ready at every opportunity, and I would probably become best "bus stop mom" friends with any woman who rocked a t-shirt like the one Walters had on in the video.

Walters' commentary about not wanting to deal with judgmental moms early in the morning is one I found pretty hilarious, and one that a lot of moms dealing with back-to-school struggles can understand.