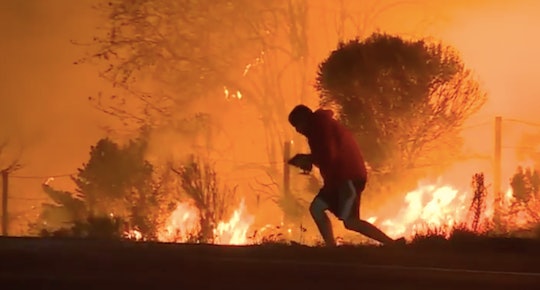 Multiple wildfires are destroying countless homes and decimating acres of wildlife in Southern California at the moment, and footage of the devastation is beyond horrifying. It's hard not to feel defeated and helpless when you watch the numerous videos of flames engulfing parts of the state, especially when you consider all the animals that are trapped in the affected areas. If your heart is breaking for all the threatened wildlife right now, you need to watch this viral video of a man saving a rabbit from a California wildfire. Not only will it give you some sense of hope, it will also reaffirm your belief in good samaritans.

Late Wednesday night, an unidentified man driving on Highway 1 near the Thomas Fire in Ventura County, California, pulled his car over to help a rabbit escape from burning brush, according to The Los Angeles Times. The video of the rescue is very emotional and tense, and it's really no surprise that it's getting so much attention.

In the clip, the good samaritan anxiously paces back and forth as he tries to coax the rabbit to safety. The rabbit, who is understandably terrified and confused, runs through the burning brush, as the concerned man looks on in horror. The man then starts jumping up and down, while also visibly pleading for the rabbit to exit the flames.

I'm happy to reveal that the little critter ultimately hopped to safety and to the arms of the unidentified hero, which is a huge relief. The clip shows the man cradling the rabbit as he checks on the poor thing's well-being, clearly so concerned for its health. Although it's unclear how the rabbit is doing now, there's a good chance the man took it to an animal shelter or another safe place.

First off, this video is an incredible testament to the kindness of this man. He didn't have to put his life at risk, obviously, but he still felt compelled to save the rabbit from what would have been a horrible death.

Many people on Twitter have since commended the passerby for his bravery, while also hailing him as a hero:

Secondly, the clip is a sad reminder that a lot of animals in California are suffering right now.

The Creek Fire claimed the lives of 30 horses on a ranch located near Ventura County on Tuesday, an incident the horses' owner referred to as "heartbreaking," according to People. Many ranches are in close vicinity to the Creek Fire, which means many horses and other animals are still at risk.

An exotic wild and exotic animal sanctuary known as the "Wildlife Waystation" is also in harm's way, according to The Los Angeles Times, and dedicated workers there are doing everything in their power to save as many animals as possible.

Martine Colette, the founder of the Wildlife Waystation, explained, according to The Los Angeles Times:

You’re now working in the dark and you’re working with very dangerous animals. You’re working with lions and tigers and leopards and hyenas and mountain lions, things like that.I have the greatest staff anybody could possibly want.

Of course, it's best to let the professionals handle animal rescues. Although the actions of the man who saved the bunny are admirable, officials advise citizens in the affected areas to not intervene if they come across a wild animal.

The actor Andy Kenareki‏ tweeted, according to Environment News Service:

If you live anywhere near the fires, please be aware that wild animals are fleeing the fires and they may show up in your yards. The CA Board of Forestry and Fire Protection is urging you to bring your domestic animals in at night and let the wild animals pass.

If you feel inspired after watching the video of the man's heroic rescue of the rabbit or if you just want to help out the affected animals, consider donating to the Humane Society of Ventura County, The Los Angeles County Animal Care Foundation, or the Global Animal Foundation. Every bit of help counts.