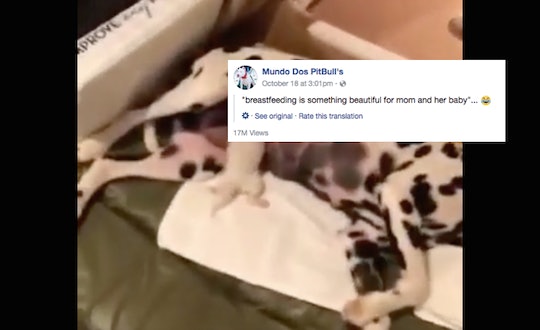 I have to be honest: Sometimes breastfeeding felt like a full-contact sport. My little tot, new to this world, would attack my breasts like he hadn't fed since he came into this world. At the end of his feeding, my nipple would be left raw and tattered. And I know I am not the only parent who's felt that way about nursing. That's why this viral video of a puppy will make all breastfeeding moms cringe.

The video, posted Wednesday to the Facebook page Mundo Dos PitBull's, shows a young dalmatian puppy nursing. Doesn't seem strange, right? What's so remarkable about a nursing dog? Well, the way he is feeding can only be described as a breastfeeding parent's worst nightmare. The puppy is aggressively enthusiastic as it moves its head rapidly side-to-side, still latched to its mom's nipple (at one point, the pup had to re-attach). It looks like the puppy is having a self-contained dance party, and just so happens to be sucking at the teat at the same time.

I both laughed and recoiled when watching the video. I can remember clearly times that, while nursing, my son would move his head in a way that made me fear for the safety of my nipple.

Of course, I am not the only parent who related to this extreme puppy nursing video. (Yes, that's what I am calling this: Extreme nursing.) As of Friday, the video racked up more than 16 million views, 137,000 likes, and 103,000 comments. In the comments, many parents recalled their own experiences nursing their little ones, and related to the mother pup — who, by the way, just looks like she's done with everything.

My daughter when I used to breast feed her. This the reason I stop breast feeding, she thought she could get a galon [sic] out of there lmao n [sic] that hurts I was in so much pain lmao.

Me at night time trying to sleep and what our son does while I'm laying there.

It's not uncommon for nursing infants to pull and tear at the nipple while they're trying to get milk. According to Kelly Mom, certain behaviors like kneading, patting, pinching, and acrobatic nursing are indicative of just indicative of poor breastfeeding manners. Like parents, infants are learning when as they go, so they may end up pretending to be a gymnast while feeding. As a parent, you have to be patient and gently discourage unwanted behavior, as Kelly Mom suggested.

But, all jokes aside, the video does bring attention to an important issue. Breastfeeding is not all peaches and roses. Not every parent has an easy time nursing their child, nor are they able to breastfeed for at least 12 months as recommended by the American Academy of Pediatrics. And there are many reasons why parents face difficulties breastfeeding — from latch problems and poor manners to past trauma and health complications. Some breastfeeding issues have easy solutions; some do not.

In fact, an Instagram post that went viral over the summer touched on the reality of breastfeeding. According to Global News, a Florida mom of two took to the social media site to show her own difficulties with nursing, and what a hurtful experience it could be. She wrote in her post, Global News reported,

Whether she is not latching on properly, whether I am not producing enough milk to keep up with her demand, whether my nipples might not be adequate, whether we confused her with having to give her a bottle after pumping....whatever it may be it has been an emotional & painful struggle.

In the end, breastfeeding is a personal experience, for humans and for pups. You feel a mix of emotions — from love and intimacy to pain and sadness. And sometimes, you come across a video that makes you stop and say, "Yea, that's exactly what nursing is like."