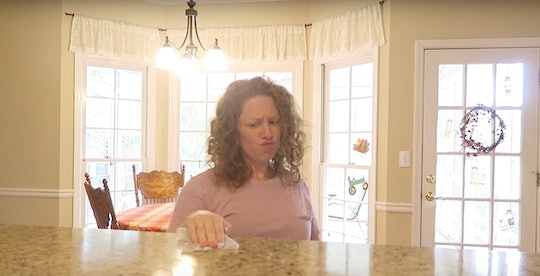 When you imagine a stay-at-home mom, how do you picture her spending her day? Doing endless housework, maybe? Or lounging on the couch watching television while her kids play quietly? Or maybe pulling her hair out while she reheats a cup of coffee for the 10th time? Well, this viral video of a stay-at-home mom's day gives you a peek into that life, albeit with a bit more dancing than I seem to have time for while wrangling my little one.

Cara Maria Leighty is an Atlanta-based mother-of-two, photographer, and social media maven who posts videos to her Facebook and Instagram pages, as well as her YouTube channel. Her content covers topics from house hunting to parenting and everything in between. Her most recent video is a mashup of household chores and some seriously sick dance moves. If you've ever wondered why moms can't seem to finish their to-do lists, Leighty has the answer: they just can't stop dancing long enough to get it all done.

Her hilarious video has racked up over 28,000 views and hundreds of shares since she posted it on Facebook last Tuesday. Friends and fans alike flooded the comments section with compliments, "LOLs," and thank you messages to Leighty for the laughs and inspiration to bust a move while cleaning their own homes.

"Girl the way you move that body is dangerous and amazing!" one person wrote. "Looks like you’re getting plenty done to me," said another. "True, true. I did burn some calories!" Leighty responded.

In the video, she can be seen busting a move while dusting, vacuuming, doing laundry, and more. But if you're thinking Leighty's video looks choreographed, think again! She told Romper via Facebook message that she was just doing her thing when she thought, ""why don't I just press record?" I'm not sure what she's putting in her coffee — or where I can get some for myself — but Leighty assured me that her days really do look like this. "I'm always dancing!" she says. "I never do anything normal."

While Leighty regularly posts to her family's social media accounts, aptly named The Leighty Life, this was the first video to go viral and it caught her off guard. As she told Romper: "I was shocked when it hit 5k views lol normally my vlogs on YouTube have like 30 views LOL! I didn't realize it was gonna get the response it did because a lot of the content I've been putting out to the internet hasn't gotten this much [of a] response. I have to thank a few mommy pages for helping me reach more moms!"

When she's not making videos or busting a move, Leighty has her hands full with a 2-year-old and a 5-year-old. The life of a stay-at-home mom isn't all fun and games, though. According to Very Well, a recent survey found that being a mom is the equivalent of working two and a half jobs, unpaid of course. The survey, conducted by Welch's, determined that the average "work day" for a mom starts at 6:23 a.m. and isn't over until nearly 9 p.m. That adds up to a 14-hour workday with no 401k contributions or overtime pay.

In the face of so much real work, Leighty says she is hoping her videos add a bit of whimsy into moms' lives. "I just wanna inspire moms to have fun and laugh and dance! That's what I do! ... And don't be afraid to just be yourself!" she told Romper.

It seems as though her plan is working. Leighty told Romper that along with the comments on her video, she also received a message from an old schoolmate friend saying that she inspired him to do twice as much laundry as he set out to do. And who can blame him? After all, everything is more fun with a killer playlist.

In case you were wondering what tunes Leighty was getting down to while getting her work done, the YouTube version of her video comes with a list of the songs playing in the background, including "Fantasy" by Mariah Carey, "I Don't Wanna Wait" by Paula Cole, and "Ray of Light" by Madonna. If you need me, I'll be playing her video on repeat and trying to knock out even half of the chores she completes. Way to go, mama.