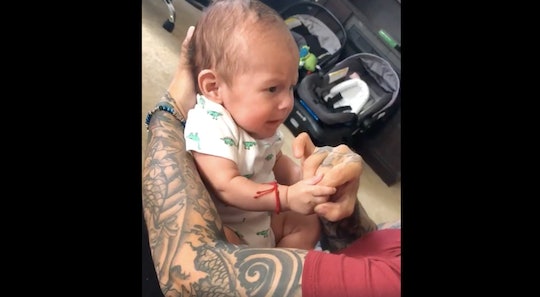 This Viral Video Of A Teething Baby Has Parents Cracking Up

Every parent who has had a child under 1 has been there: The drooling, the constant need to bite, suck, or chew something even if it's not at all appropriate or even clean. And if you're in the thick of this stage, then there's a good chance you'll appreciate this hilarious video of a teething baby that has gone viral. Not only does it have parents everywhere cracking up, but it's a reminder that laughter can get you through those tough parenting stages.

The comedy all started when someone decided to film Tanisha Ulloa Mendoza's 3-month-old son, Ralphy, being tended to by his grandma. In the video the California resident recently posted to Facebook on Sept. 1, which has since been shared a whopping 144,000 times as of Wednesday, Ralphy can be seen sitting on grandma's lap, clad in a dinosaur onesie and red bracelet.

Ulloa Mendoza can be heard telling an upset Ralphy that she's on her her way home, but this info doesn't seem to soothe him. Nope, the infant continues to appear impatient, and in the midst of his fussing, he grab grabs granny's finger for what would be a major chomp inside his mouth if there were any actual dental components involved.

"Oh my god!" Mendoza's mom guffaws in total surprise as Ralphy inhales her digit, which doesn't seem to help matters much, as he still looks upset even after the "snack." Ha!

Yep, it's clear Ralphy means business. And given how painful teething can be, I don't blame him.

To avoid unnecessary commentary from trolls, the mom captioned the video with an important PSA, noting that Ralphy had been fed right before the video was filmed. "I just had to share this video....Ralphy is Teething and Not Having it if he had teeth he'd bite my moms finger off," she wrote. "FYI his pediatrician confirmed he's teething at 3 months & no my baby's not hungry he just finished a whole bottle and was burped."

I understand this completely, having survived teething three times, as did the endless chain of parents who shared the clip with their friends. Many moms shuddered to think what would have happened had the baby had teeth or if Ulloa Mendoza had been home and breastfeeding at the time.

Others found the video to be hysterical, with one person writing: "That’s so funny!!"

Another person marveled: "Look at that chomp!!

All jokes aside, teething can be serious enough to really disturb babies, with symptoms including drooling, rubbing gums, fussing, loss of appetite, and difficulty sleeping, according to Colgate. And while there isn't any concrete evidence, anecdotal reports suggest teething babies can even experience diarrhea or fever, Colgate added.

Fatherly reported, however, that the diarrhea-teething connection is an old teething myth to be ignored. Although digging into my memory, I do recall baby number one seemed to have serious symptoms at the same time their teeth came in, but maybe it was simply a case of bad timing.

Beyond the exhaustion of dealing with a baby, it can be hard to see your little loved one in the physical discomfort. If this sounds like you, spend a little time researching newer remedies out there. I was told by the pediatrician that homeopathic remedies wouldn't make a difference, but when I tried a couple of brands from a health food store, one did. But always check with your pediatrician or trusted healthcare provider before trying any these hacks, as every child is different.

Here's to hoping Ralphy finds some relief during this teething stage, as it's clear he's really having a go of it. But hey, at least he'll have this hilarious video to look back on when he grows up.