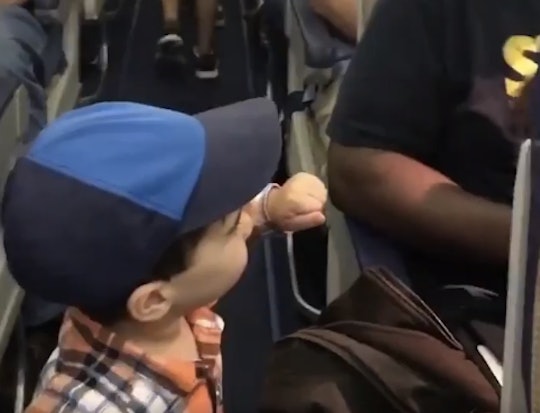 Let's face it: air travel these days isn't always the most exciting or stress-free experience. Anything that can make it even a little better is usually a welcome development for people crammed into coach for a long flight. That's why this viral video of a toddler fist-bumping people on a plane is everything you need right now, if you've ever struggled through the boarding process with kids.

According to ABC News, Alya Jakubowicz's son, Guy, is "charismatic," and she was not at all surprised that as they boarded a plane recently, he went through and fist-bumped several people as he made his way down the aisle. She told ABC News:

He’s very funny, not shy at all. He doesn’t leave anyone out.

Hopefully those traits are something Guy holds on to as he grows up. The little boy in the clip that's gone viral is just 2 years old, but he's already more famous than a lot of us could ever hope to be.

Guy's mom posted a video on her Instagram account of her little guy fist-bumping with several passengers who were already seated as they made their way to their seats on a plane, and it seemed like most of them were more than happy to oblige the little boy's request as he held out a tiny fist to bump.

According to 10News out of San Diego, Guy and his family were boarding a Southwest flight from Kansas City to Chicago when he went through and greeted several of his fellow passengers in his chosen way. And according to that outlet, the flight attendant, Amy, even got a fist-bump from Guy.

His mom, Alya, told 10News just how Guy came to enjoy fist-bumping so much. She told the outlet:

When he was 18 months old we were stuck on the runway in Dallas waiting to depart to New Orleans. He was getting antsy so I let him loose in the aisle. Some fun gentlemen then taught him to fist bump. I think that really stuck with Guy because he loves to fist bump and does it everywhere he goes.

Who knows what would have happened if that man had never taught Guy such an epic move? He might never have made all those passengers smile before their flight, and may have never become Twitter famous.

Guy's mom may have summed it up best when she wrote in the caption of her Instagram post, "He is making flying the friendly skies even friendlier with one fist bump at a time."

But it's not only the passengers who got a wonderful surprise because of Guy's friendliness — as it turned out, he and his family got a little reward for his kindness towards fellow flyers, too.

The Kansas City Star reported that the vice president of publicity for the Kansas City Royals baseball team, Toby Cook, saw the video and realized that the family flew out of his team's fair city in it. So, he made sure to send a "Blue Crew kit" that included a Royals baseball cap, eye black, and ear buds to Guy and his family to enjoy. According to the Star, Alya's mother has season tickets for the team, so clearly they're fans.

In any case, Guy's "signature move" was nothing short of super cute. Not only did it brighten the day of those awaiting take-off on their flight, but everyone who gets to witness the moment at home can smile about it, too, thanks to the power of social media.

And who knows? Maybe we will see Guy on a campaign trail when he grows up. Forget about shaking hands and kissing babies — it's all about the fist-bump now.