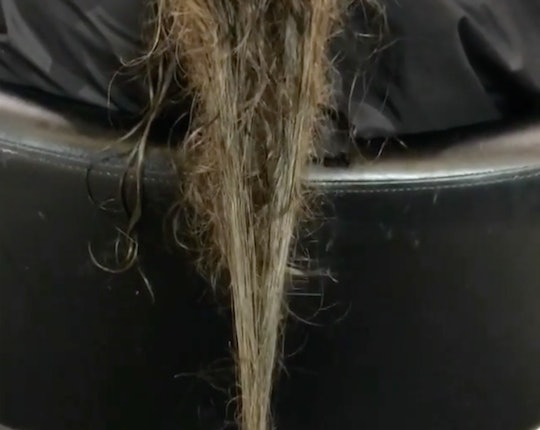 This Viral Video Of Postpartum Hair Loss Is Hard To Watch, But Relatable AF

Any new or seasoned mom knows that postpartum symptoms can be a little bizarre. The leaky boobs, cramping, and hair loss can all seem a bit much — especially if you've never experienced it before. While these changes to your body might not seem normal, they totally are. So it's great when other moms can help clear up any of the confusion or fears surrounding them. Just like this viral video of a woman's postpartum hair loss is doing right now for countless new moms.

If you've never experienced postpartum hair loss, then you might want to have a seat while you watch this video, because it is a bit startling. The video, posted by hair stylist Christina Kreitel of Intrepid Studio Salon in Orem, Utah, according to Yahoo Lifestyle, shows an example of postpartum hair loss in clear detail. In the video, Kreitel lightly runs her hands through her client's hair and slightly pulls on it. But instead of her client screaming or a few strands coming loose, an entire clump of hair is pulled from her head. It's that easy. Both Kreitel and her client laugh in the video. "This is going to gross so many people out!" Kreitel says in the video.

If you're unfamiliar with postpartum hair loss, the caption does a bit of necessary explaining. Kreitel wrote:

Nothing like that Post Pregnancy Shed man!!! You know the time, 4 months postpartum and you FILL that drain! I'm going through this myself and like to collect it on the wall of my shower. Haha so grossly satisfying. This is just as good as scalp treatments!!

The video has garnered over 3 million views since it has been posted for a good reason — this video normalizes all of those odd symptoms and changes that women go through after childbirth. Some people took to the comment section to share their own stories of postpartum hair loss.

"As soon as my babies hit the third month, my hair hits the floor," one mom commented. "Literally lost so much hair after I had my son. It's terrible," another said in support. But others can't seem to figure out if they should be amazed or confused by what is going on in the video. "That's literally my worst nightmare," a commenter said.

Luckily for these commenters, it is OK to feel both disgusted and amazed by this video. Hair loss is just one of the many postpartum symptoms of giving birth that people don't talk about enough. Many women might be aware of postpartum depression, the unexplainable feelings of sadness that some women might experience for months up to giving birth (one in nine women in the United States experience this, according to the Centers for Disease Control and Prevention). But there are many other symptoms that come with giving birth — like fatigue, cramping, and night sweats (among many others), according to What to Expect.

Losing your hair is an incredibly common for women to experience after giving birth, and it doesn't just happen out of thin air (or thin hair). Postpartum hair loss is temporary, according to Parents, and can be attributed to hormones in the body. During pregnancy, according to Parents, the increased levels of estrogen in your body "freeze" hair (which is why some women experience having stronger hair while pregnant). But when you're no longer pregnant, the estrogen levels decline and hair begins to fall out. According to Fit Pregnancy, 50 percent of women will experience postpartum hair loss between the second and seventh month after pregnancy.

Postpartum hair loss is so common, Kreitel told Yahoo Lifestyle that it has become a "running joke" that Kreitel will pull out her client's hair during their postpartum appointments — this must be very satisfying for the client and the stylist. Although it may look terrifying, this hair loss is just one of the glorious and surprising parts about having a child that people fail to tell others about. Luckily, this Instagram video does a great job in capturing this incredibly common side effect of giving birth.