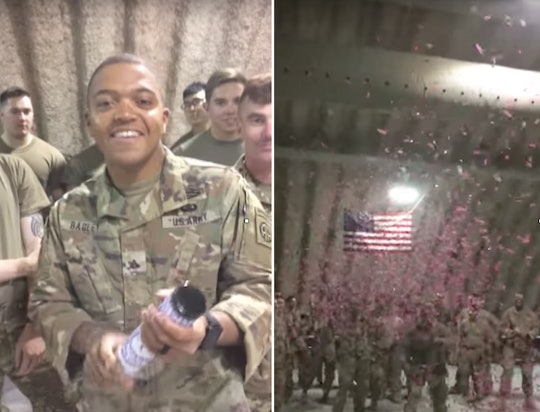 Military servicemen and women put their lives on the line to defend America's freedoms, and sometimes, those lives are lost. But along with a potential for danger, the military lifestyle also comes with a support system likened to a second family. And this viral video of these troops learning the sex of a fallen soldier's baby shows just how strong of a bond there is between a solider and his fellow service members, as well as the abounding resources available to families.

Britt Harris and her husband Spc. Chris Harris were married for less than a year before he was sent on a deployment with the U.S. Army to Kandahar, Afghanistan, according to ABC News. While serving his deployment, Chris' life was cut tragically short at the age of 25 when his convoy was struck by an improvised explosive device, or IED, along with Sgt. Jonathon Hunter, according to Stars and Stripes.

Just a week before Chris lost his life, Britt had told him that she was pregnant with their first child, as ABC News reported. Using a decorated onesie reading "Chris You're Going To Be A Dad," she shared the news with him over FaceTime. "When I told him, it was the happiest I’d ever seen him. He was so excited," she told ABC News.

Due in March, Britt is facing the difficult reality of parenting without her partner. But rather than focus solely on her own grief and hardship, she is also concerned with her husband's team of soldiers who served with him in Afghanistan and how they are grieving his loss. She told ABC News:

I’m dealing with a lot and grieving but I got to take off work and go to counseling, but they didn’t get to. I didn’t want them to be forgotten over there.

Stars and Stripes reported that Harris was stationed at Fort Bragg, North Carolina as a part of the 2nd Battalion, 504th Infantry Regiment, 1st Brigade Combat Team, 82nd Airborne Division. Britt said that Chris' fellow soldiers were much more than just coworkers to him; he called them his "brothers," according to BuzzFeed.

"Chris is an only child. They were his family. Everyone that I’ve met, before Chris passed and after, if they’re in the military, they’ve treated me like actual family or royalty, actually," Britt told ABC News.

Due to this strong bond, it is important to Britt that Chris' "brothers" play a large role in the life of their new child. So, she told ABC News that she decided to make them the recipients of some big news:

See the full video below.

In the video, the soldiers are seen opening poppers on site in Afghanistan with an American flag making a symbolic backdrop. The poppers reveal pink confetti; Britt is having a girl. One of the soldiers, Joel Crunk, posted the video to YouTube with a caption reading:

August 2 2017 Chris Harris laid down his life for our country. His newly wed wife was expecting their first child. The reveal is in Afghanistan with the men who fought by his side. We are happy to welcome the new member of our company.

Britt shared the video to her Facebook page, calling the little girl — who will be named Christian Michelle Harris after the baby’s father — her "miracle princess." She told ABC News that she was in tears of joy after watching the video. "I probably watched it 100 times myself," she told the outlet. "I was crying but smiling because their reaction was so wonderful."

Both beautiful and heartbreaking, the soldiers' video is a reminder that Britt and her baby still have quite the family backing them up. In hard times, it is always a comfort to know that someone — or an army of someones — has your back.