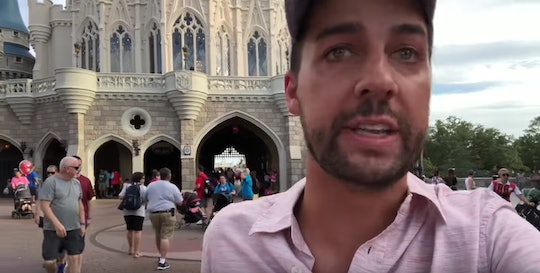 Ah, taking children to theme parks in the summer: It always seems like a great idea when you're planning it. But the logistics of corralling little ones in a large crowd, waiting in endless lines, dodging requests for expensive food/souvenirs, and enduring the blazing summer heat, for lack of a better word, sucks. Kids get tired and whiney. Parents are hot and irritated. You're surrounding by people all attempting to do the same thing. Sure, there are moments that make it all worth the trip — their faces after an awesome ride, or getting that photo with Mickey Mouse. But after it's all said and done, parents often feel like they need a vacation from their family vacation. And to be perfectly honest, this viral video perfectly nails what it's like taking kids to Disney World.

As PopSugar reported, comedian John Crist isn't even a dad — and yet somehow, he managed to capture the hell that can be taking a family vacation to "the happiest place on Earth." Recently, the Nashville-based stand-up comic made the trek down to Orlando, Florida and proceeded to channel pretty much every parent who has taken their children to Disney World. And judging by the 165,000 likes and the 228,000 shares his Facebook video has gotten so far, Crist is really onto something. "We made it to the happiest place on Earth. It's 9 a.m., and I've gotta schedule every minute of our day until 9 p.m. Pay attention and stay close," he says to his non-existent family, to begin the hilarious 1-minute, 44-second video.

One of the more memorable scenes is when Crist is speaking in response to one of his "kids'" requests for a pair of Mickey Mouse ears. "Forty-five dollars for bedazzled mouse ears? Baby, do you want these or do you want to go to college?" LOL.

Another ultra-relatable parenting moment revolves around demands for theme park food. "No you cannot have Goofy-shaped chicken nuggets," he says. "Sit down, your mother brought ham sandwiches."

Here are a few other gems, for your enjoyment:

"Oh, for heaven's sakes. Pick up your garbage and throw it away. This isn't Six Flags."

"Listen, Rebecca, she's not coming out today. That dream to meet Elsa? You better let it go."

"Well, hurry up. Make-believe your feet aren't sore. This is Disney, use your imagination."

"You know what I want to ride? A park bench in the shade."

"A four-hour wait for Toy Story? That line is to infinity and beyond."

Arguably the best line comes at the very end, when Crist threatens his non-existent children with: "If you don't get back here by the count of three, I will spank you into Tomorrowland."

For the record, the comments section of Crist's Facebook post of the video is a gold mine all in its own. One Facebook user wrote, "Me to my bickering children in line for one of the many rides: 'You stand over there, you there, do not even LOOK at each other or I swear I will hand you over to Darth Vader!' Turn to husband and whisper through clenched teeth:'"It's the happiest effing place on earth!!!'" LOL. The joys of parenting at Disney World.

Another person chimed in with, "I was just took my kids there for the first time today. Literally never again. It was like wrangling sheep with a feather, in the center of a volcano."

Meanwhile, another Facebook user wondered, "John Crist, how you managed to capture my husband’s EXACT Disney behavior is beyond me???"

Yet another person wrote, "Yup, happiest place in earth. My *ss. When i find myself yelling at my children 'this is the happiest place on earth, GET HAPPY.' Have never seen so many exhausted parents and crying children."

Apparently, Crist's inspiration for his now-viral video came from his own childhood — because he was actually one of eight kids. “This is for sure how it went down when we went to Disney,” he told Us Weekly. “One kid was always running off, there was a tired kid, the hungry kid. I don’t care how patient of a parent you are, Disney will push your limits.” And all the parents said, "Amen!"

Honestly, this video makes me feel better about having zero intentions of ever taking my children to Disney World. Between the cost of travel and the cost of tickets/lodging alone, I don't even want to think about the thousands of dollars I would be dropping — all for a crowded, stressful time spent mostly waiting in lines in the Florida heat. No thank you. Not when I can drive to a theme park that's much closer (and cheaper) to do the exact, same thing.