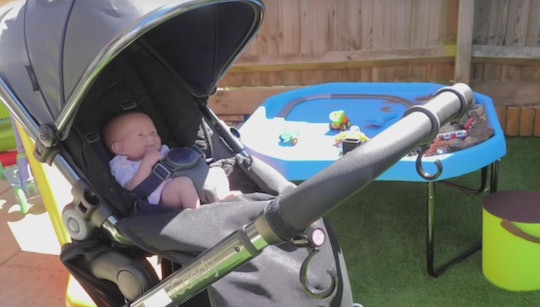 Trying to familiarize oneself with all of the do's and don'ts of becoming a new parent is exhausting, and there's always more to learn. When it comes to being a responsible caregiver, there are certain safety regulations and precautions you want to take, and while many are self-evident, others may be a little less obvious, perhaps slipping just under your radar. This vlogger couple's experiment proves why it's so dangerous to put a blanket over your baby's stroller in the summer, even if it's something you normally do when the weather is a bit cooler.

PopSugar reported that YouTube vlogger parents JK and Charlie realized that they had made a dangerous mistake with their son, Noah. In the same way that a closed car heats up in the summer, so does your child's stroller when there's a cloth blanket concealing them.

"The idea of your baby getting too hot in the pram or perhaps getting burnt, or getting UVA and UVB rays is really scary, so what parents do is grab something like this... and throw this over the pram," Charlie said. The couple then decided to conduct a controlled experiment, in which they would show their viewers exactly what could happen if their child were to be left underneath a blanket in their stroller on a hot summer day.

To conduct the experiment, the couple explained that they would use a quick, seven minute test. They began on a mid-grade summer day, when it was 86 degrees Fahrenheit outside. That's definitely hot, but pretty average when it comes to mid-season highs. They then put out two strollers under the sun. Only one had a blanket over the top of it. They placed baby dolls in each of the strollers, and then a thermostat as well.

The results came in as one would expect: in the stroller with the blanket over it, the temperature inside reached 95 degrees Fahrenheit in just a few moments. "If we had left that going for another 10 minutes, 15 minutes, god knows how hot that would have gotten in there," Charlie said. "I think it really, really highlights why we should just never put these over a pram."

BabyCenter.com reported that babies and children are especially vulnerable to heat stroke. Some of the signs of heat stroke include being warm to the touch, appearing red and sweaty, a rapid pulse, being restless and confused, headache, vomiting and unconsciousness, among others. Though there is no one set temperature at which heat stroke is guaranteed, the warmer it gets and the less ventilation and hydration available, the higher the risk.

Dr. Tina Tulik told Today'sParent.com that when it comes to making sure summer adventures with your baby are safe, prevention is "key." She continued: "Ensure your child gets frequent cool-down breaks in the shade or indoors, depending on the temperature. Babies overheat quickly, and bigger kids often run around, so they’re likely to work up a sweat and need to rehydrate. Have cold water available for kids to sip throughout the day. Dress your child in a hat, sunscreen and sunglasses, and ensure she is wearing breathable, light, non-restrictive clothes."

PopSugar previously reported that research has shown placing a blanket over your baby's stroller, though seemingly creating shade, actually has a "furnace-like" effect, making temperatures soar to dangerous highs. In the study they cited, an uncovered stroller at 72 degrees reached 93 within 30 minutes, and after an hour, was at 100 degrees. The findings are consistent with what JK and Charlie had found.

So the next time you head out with your little one in the summer, ensure that their stroller remains uncovered and, if possible, out of direct sunlight. Keeping little ones safe outside is every parent's first priority, and regulating temperatures for kids, especially when they are too small to communicate how they are feeling, is one of the top precautions to take.