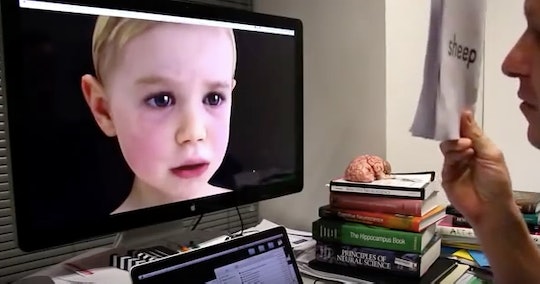 This Virtual Baby Has Real, Human Emotions, & It's Seriously Freaky

Babies may be tiny, but they're certainly a present physical force with all the crying, pooping, near-constant revelations about the world around them, and the pretty much 24/7 care they require. Well, one research group in New Zealand has created a whole other type of baby who may not exactly need a diaper change but certainly has the ability to capture hearts and imaginations just like any baby does. Meet BabyX, the super lifelike virtual baby, which will either freak you the heck out or make you pine for the day you can have one of your very own. This groundbreaking, artificial intelligence (AI)-powered innovation may exist solely on a computer screen (for now, at least), but her arrestingly realistic human looks, gestures, and functioning make her a downright marvel.

BabyX is the brainchild of special effects artist and AI guru Mark Sagar, who founded the Auckland-based startup Soul Machines and modeled the digital baby off his own daughter at 18 months old, according to Bloomberg. Ostensibly just like the real girl on whom she is based, BabyX is undeniably adorable with her blonde hair and wide blue eyes, rosy cheeks and oftentimes earnest expression. And also just like the real girl, BabyX apparently boasts the ability to have her own experiences, to learn, to react to stimuli, and to interact with the world around her as a human does.

According to its website, Soul Machines employs a multi-disciplinary team of AI researchers, neuroscientists, psychologists, artists and innovative thinkers in order to create a whole squad of emotionally intelligent Digital Humans with 3D faces that also have their own personalities. To help create Digital Humans, they harness knowledge about both neural networks and machine learning to build "biologically inspired models of the human brain," Soul Machines' chief business officer Greg Cross told CBC News. As Bloomberg's Ashlee Vance explained in a profile of Sagar and his creations, BabyX smiles "because her simulated brain has responded to stimuli by releasing a cocktail of virtual dopamine, endorphins, and serotonin into her system" — not simply because she was programmed to do so.

In short, BabyX is a far *cry* from your average video game simulation, Soul Machines wrote in a recent Instagram post:

BabyX may look like a PlayStation 3-era human facial render, but she's very complex behind the scenes. The AI has been built to recognize movement, human faces, and other external visual stimuli, so that it can react and engage in a human-like manner..

That's all pretty impressive for a virtual baby (and the scientists who created her), but there's a good chance that humans won't exactly be quick to embrace BabyX and others like her as their very own. That's because of the phenomenon called uncanny valley, which predicts that [the more human robots look without looking totally like a human, the more humans will be unsettled and even repulsed by them, Slate reported. Still, the theory goes, if the robot starts to look so completely human that humans truly can hardly tell the difference, they will be once again receptive to interacting with it positively. A Soul Machines representative told Romper in an email that there are currently no plans to create a physical version of BabyX.

On the other hand, it's hard not to be fascinated with how humanlike and convincing BabyX really is. Even if you don't want a virtual child of your very own, BabyX is still an intriguing concept that also presents some intriguing philosophical questions. As ExtremeTech points out, it's not yet clear how much actual sentience she has. So, the question remains as to whether she can experience pain in addition to joy. Clearly, there is a lot more left to learn about this kind of technology and what it can do to and for humans.