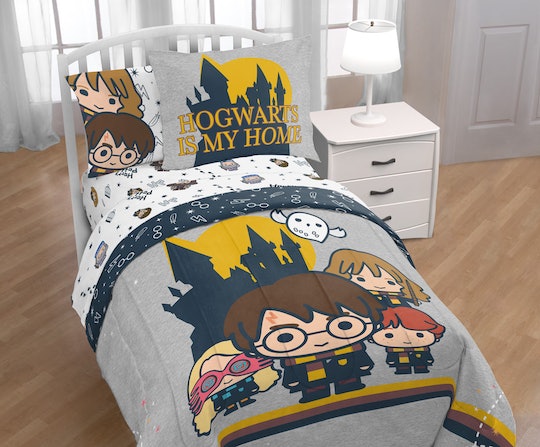 Does your Harry Potter-obsessed kiddo dream about going to Hogwarts every night? If so, your mini Muggle will love the Harry Potter Hogwarts bedding I found recently at Walmart. The design features Harry, Ron, Hermione, Luna, and Hedwig in all their glory, making this bed set about as awesome as they come for little ones enamored with the magic of Harry Potter and his friends. Also, can we give a quick shout out to the textile designer who made the wise decision not to include He Who Shall Not Be Named in the group? Smart thinking.

The twin bed set includes one reversible comforter, a flat sheet, fitted sheet, reversible pillow case, and coordinating pillow sham. Made to fit any standard twin sized bed, it's machine washable for easy care. I also love that the comforter is reversible (the flip side features various printed icons inspired by the series, with a navy blue background) so you can switch things up every once in a while. The pillow sham features the phrase "Hogwarts Is My Home," and layers in with the three-piece sheet set to create a complete look. I have no doubt your little one will feel right at home in these comfy sheets from Walmart. And if there's a bad dream? Why a quick "Expecto Patronum!" will banish it forever.

I've written before about my children's love (particularly my older daughter) of the Harry Potter book series, the associated movies, the LEGO sets, and other merchandise. Our visit to The Wizarding World of Harry Potter at Universal Studios a couple summers ago is among the great highlights of her young life. (Like, she still talks about it. A. lot. Also, the Butter Beer was delicious) It is the one book series that she goes back to time and time again, even though by now, of course, she knows all the spells, all the answers to secrets, and how the story ends. Is that not the mark of a truly good book? One in which you know what happens, but you still thoroughly enjoy? Suffice it to say, my children would start the Harry Potter fan club if there weren't thousands of them already.

Famed Potter author, J.K. Rowling, recently sent the internet on fire when she tweeted an ominous looking design of Voldermort's notorious Dark Mark on her Twitter account with the attached caption, “Sometimes, darkness comes from unexpected places." Turns out, it was just new marketing artwork for Harry Potter and The Cursed Child on Broadway, but the tweet alone sent fans around the globe into a tizzy as they theorized on a movie adaptation of the incredibly popular theatrical production. All this to say, the Harry Potter fan base is alive and well, despite the fact that the first book in Rowling's series, Harry Potter and The Sorcerer's Stone, was published over 22 years ago. Children and teens who read the first book and subsequent series are now sharing the love of Harry Potter with their own children; pretty special, right?

While I predict Walmart's Harry Potter bedding will make bedtime and lights out a little easier for mini wizards, I must share a quote from Albus Dumbledore in Harry Potter and the Prisoner of Azkaban that has always stood out to me: “But you know, happiness can be found even in the darkest of times, if one only remembers to turn on the light.” That Dumbledore was a wise one. As you take his words into account (and turn off the lights for bedtime), magical dreams await in this new Harry Potter "bed in a bag" set from Walmart.

More Like This
A First Look At The New Hess Collectible That's Probably Definitely Going To Sell Out
The New Dad In Your Life Will Love These 20 Sweet Valentine's Day Gifts
This Is What New Moms Really Want This Valentine's Day
Are We All Stressed About Grocery Prices Right Now Or Is It Just Me?
What Parents Are Talking About — Delivered Straight To Your Inbox