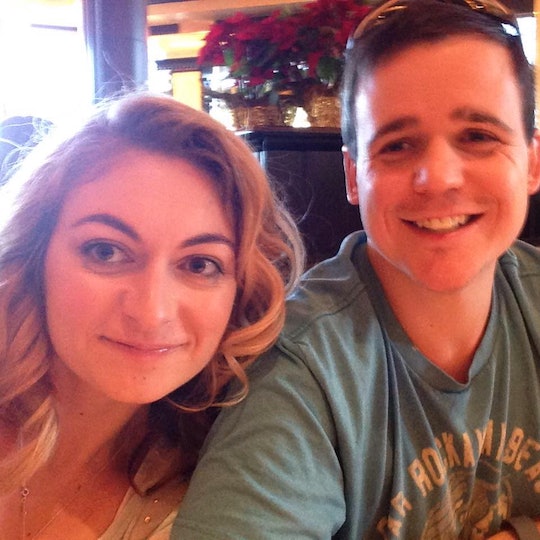 I thought about leaving my husband constantly, until the day I decided that getting divorced just wasn't an option for us. Yes, there were tons of reasons to leave — that morning, especially, had all the makings of a fight — but there was one reason why I decided to stay with him. On that dreaded morning, it was like everything that could've went wrong, did: the kids had woken up before dawn for the fifth time that week, we were stir-crazy from deciding we would use my husband's week off from work to stay home and potty train instead of taking day trips or a vacation, and we hadn't had any coffee yet. So when my husband started snipping at me in the kitchen, angry that I'd scheduled a dental cleaning and my annual OB/GYN appointment during the only time he was available to cover childcare, I disregarded the fact that he was probably speaking out of exhaustion and saw red.

This was hardly the first time he'd gotten unreasonably angry over the fact that I was fulfilling a basic need. A month prior, he was furious with me when I asked if he could possibly come home early from work so I could go to the doctor for a raging ear and sinus infection. We argue anytime I get a migraine and he has to "pick up the slack." He's even told me he gets resentful when I take too long to make dinner because he thinks I'm trying to use cooking as an excuse to avoid kid duties (OK fine, yes, but not all the time!). Ignoring the litany of reasons I could've left, I decided to stay. And I am so incredibly glad I did.

I knew the odds for divorce were higher for parents of multiples, but it wasn't until we had the kids that I realized just how stressful parenting two at a time really is.

Before we had kids, my husband and I were loving to the point of nauseating. He would drive me to work so we had more time to spend together in the morning. We emailed back and forth all day long, never running out of things to say. We took care of each other when the other was sick and worked out together, but when we had kids, all that changed. Now we're this couple who talks briefly and infrequently, a few minutes before passing out from exhaustion each night and a few mumbled questions and answers over coffee in the morning before he heads off to work.

If you look at the statistics, parents of twins are 17 percent more likely to get divorced than couples who have children one at a time. Going into our IVF treatments, I knew the odds for divorce were higher for parents of multiples, but it wasn't until we had the kids that I realized just how stressful parenting two at a time really is. Raising twins is an amazing experience and I don't regret having my kids, but dealing with two children of the exact same age who have very different personalities is the hardest thing we've ever done.

I promised myself the next time I felt he was being unfair to me and my needs, I was going to tell him I wanted to separate. So as he ranted about how selfish it was for me to go to the gynecologist while he was on vacation, I opened my mouth to say the words I'd rehearsed in my heads a thousand times.

After our boys were born, I reached a point where I was tired of feeling like it was my responsibility to be the primary caregiver for the kids. I didn't want to feel guilty of taking time away from them to do something for myself, whether it was go to the doctor, or (dare to dream) buy myself a new bra. All of our long talks and plans to be kinder to each other seemed to last for only a week or so before we were back to spewing out resentments, and I'd started to envision a life where there were whole blocks of time when I could count on my husband to parent without feeling guilty for it. I promised myself the next time I felt he was being unfair to me and my needs, I was going to tell him I wanted to separate. So as he ranted about how selfish it was for me to go to the gynecologist while he was on vacation, I opened my mouth to say the words I'd rehearsed in my heads a thousand times.

But before I could drop the verbal ax, I looked over at my kids. They were playing "Starbucks" as our whole argument was going on, but rather than looking scared or concerned that mom and dad were fighting, they were laughing and playing like we were background noise. They looked up at me and grinned, and that's when I knew I had to stay in this marriage.

It's not like the sight of my kids playing peacefully deflated my anger. My blood still boiled with the wrath of my self-righteousness, and trust me, I had zero plans of rescheduling that pap smear. But seeing how they took our argument in stride made me see that what we were fighting over really wasn't that big of a deal, certainty not enough for me to feel justified in calling it quits. Our marriage has issues, sure, but it's far from broken. Before having kids, I worked for years in family court as a courtroom clerk for divorces, custody battles, and restraining orders. I know just how toxic and violent bad marriages can be, not just from my former work as an attorney, but because I watched it happen between my own parents.

Unlike my household growing up, my husband and I don't throw things at each other, or hurl cruel insults. The fact that my kids were perfectly content, happy, and playing while we hashed out our marital woes opened my eyes to something I'd overlooked.

It's been decades since I've seen my birth father, but I still get a knot in my stomach whenever I picture him. I see him looming over my mother's car, the windshield shattered from the dog chain he held in his fist as she tried to back out of the driveway. I hear the sound of my mom's breathless squeals and remember the confusion and dread I felt at age 5 when I opened front door and saw him sitting on her chest, a bottle of Windex held up to her eyes as she squirmed helplessly underneath him to get away. I had thought those noises were her laughing from being tickled. I was wrong.

I've seen what a truly failed marriage looks like, and it doesn't always include apologies after an argument or a conciliatory container of cupcakes the way mine does. Yes, we fight, but the occasional argument doesn't mean my marriage is a failure, especially when we make sure to treat each other with respect even while fighting. Unlike my household growing up, my husband and I don't throw things at each other, or hurl cruel insults. The fact that my kids were perfectly content, happy, and playing while we hashed out our marital woes opened my eyes to something I'd overlooked: not only are our disagreements something we can work on improving, but the way we choose to disagree with each other is pretty healthy.

My husband and I are still two people who love and care for each other, and our issues steam from the reality that raising twins together has made it harder for us to show that love in the ways we used to. On those magical nights when the kids fall asleep early and neither of us has work or a workout to do, we still really like hanging out with each other and make each other laugh. Plus, he's the only person who I can have an entire conversation with through a single eyeroll in the checkout line at the grocery store.

It's not that I think we're soulmates or that there's no one else in the world I'd ever get along with; I'm just realistic to the fact that real life isn't always like a fairy tale. And even if we did go our separate ways, we'd still have children together, which means our lives will always be intertwined as we make parenting decisions for the boys. So even though a relationship is about love, it's also about who you want to bicker with. For me, I still choose my husband.