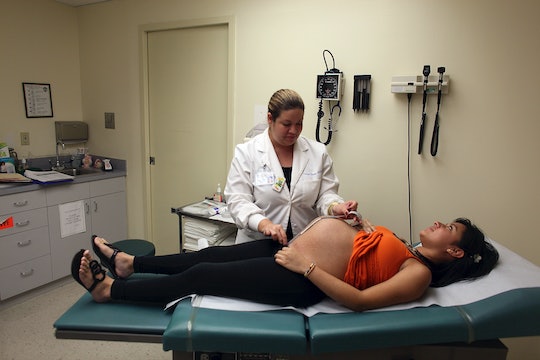 WI School Could Lose Its OB-GYN Accreditation For This Reason

School officials at the University of Wisconsin Madison campus have concerns about the future of the school's national OB-GYN accreditation. The disappointing reason this Wisconsin school could lose its accreditation: a Republican-backed state House bill that would prevent the UW-Madison faculty from training its resident physicians in abortion procedures. Officials also believe that the bill would worsen the existing shortage of obstetrics/gynecological providers located in the state of Wisconsin. The school is fighting the bill with all its might.

According to Robert Golden, the university's medical school dean, in order to maintain national accreditation for OB-GYN training, UW-Madison must provide abortion training. "This simple act will clearly lead to the loss of accreditation, but the damage will go far beyond the residency program," he said.

Without this training, residency students would be pushed to find accredited schools in other states. This would be a serious issue for Wisconsin, as the American Medical Society reports that 20 of Wisconsin’s 72 counties already lack an accredited OB-GYN.

The author of the bill, Republican state Rep. Andre Jacque, told the Associated Press that he doubts the school will lose its accreditation and he remains dedicated to the measure. "I’m trying to get UW out of the abortion business," he told The Wisconsin State Journal. "I’m on pretty firm ground here."

Romper has reached out to both UW-Madison spokespersons and Jacque for further comment on the situation and is awaiting a response.

As of now, the national Accreditation Council for Graduate Medical Education requires that all medical schools offer abortion training to residents in order to obtain and maintain their national accreditation. Those students with objection to the procedure, either moral or religious, have the choice to opt out of this training.

The current law in Wisconsin doesn't allow the spending of public funds on elective abortion procedures. Because of this law, the UW medical school relies on Planned Parenthood of Wisconsin for funding for abortion training and procedures that OB-GYN resident students perform at the Madison clinic.

The bill in question, introduced by Jacque in April of this year, would not only prevent UW employees from training residents in performing abortions, but would also prevent students from obtaining their training elsewhere and performing the procedures anywhere outside of a hospital. The aforementioned law prevents residents from receiving abortion training in the university hospital, which leaves them with nowhere at all to obtain such training. The lack available opportunities is what Golden believes will push students to seek accreditation and residency outside of the state.

Increasing the existing shortage of OB-GYN practitioners would impact the state as a whole, not just the university. Unfortunately, Wisconsin isn't the only state with such a shortage. The American College of Nurse-Midwives reported that nearly half of all counties in the United States are without a single OB-GYN.

When women don't have ready access to OB-GYN services, they struggle to receive health care during pregnancy, postpartum care, and family planning services. If this bill passes, it could have devastating impacts on women in the state of Wisconsin. As Golden put it, "Nobody would choose to come here" — and that's bad news for everyone.