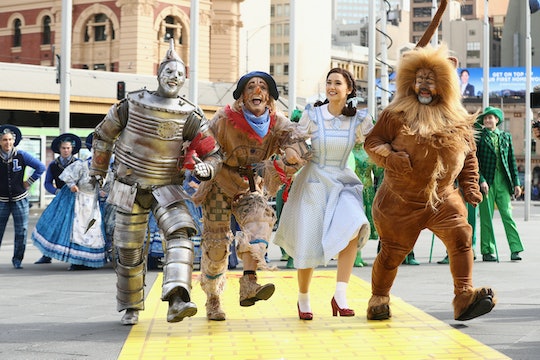 Lions and tigers and bears and a whole theme park dedicated to the Wizard of Oz — oh my! If you're a fan of munchkins, Glenda, Toto, and Dorothy, you're going to want to listen up and pack your bags for North Carolina. Because this 'Wizard of Oz'-themed amusement park is back and it's perfect for new and long-time fans alike.

Sure you go to Disneyland, Knott's Berry Farm, Magic Mountain, or even Legoland, but chances are you've never seen anything quite like the Land of Oz theme park located in North Carolina’s Beech Mountain Resort, as Red Tricycle noted. And, it's a chance for parents to introduce a whole new generation to the Emerald City.

Given that 2019 is the 80th anniversary of the beloved film, according to Variety, there's no better time to go than now.

Real fans will love getting up close and personal with original costumes from the film and other one-of-a-kind memorabilia, according to the theme park's Instagram page.

You'll only have one month this summer to check it out, however, because the park is not open year-round. If you want to experience the Land of Oz, plan on visiting Thursdays and Fridays in June, or on June 26. The highlight of the trip? A 45-minute immersive trip down the yellow brick road with Dorothy herself.

The original owners built Land of Oz in an attempt to capitalize on the land during Beech Mountain's skiing off season. Now that new owners are slowly refurbishing and bringing the park back to life, it's only open for a handful of days through out the year, according to Charlotte Stories.

Tickets are $27.50 plus fees and taxes, and can be purchased in advance online. Children 2 and under are free.

There is one catch, however. Because Land of Oz is located in a ski resort, you'll have to take a ski lift (additional $10 ticket) or a shuttle (for free) to the park, according to the site. But, the view up is pretty stellar!

The park was originally opened in the 1970s but after being damaged by a few hard-hitting storms and going through a bout of financial trouble, the Land of Oz closed in about a decade later. Then in the 1990s, the park reopened with a festival known as Autumn at Oz, that still happens today, according to reported from ABC News Raleigh. So if you can't make it there over the summer, maybe you can plan a trip in the fall.

The Wizard of Oz debuted on the silver screen in 1939 and was an immediate hit, according to Variety. An excerpt of the publication's original review of the film by movie critic John C. Flinn Sr. said:

Nothing comparable has come out of Hollywood in the past few years to approximate the lavish scale of this filmusical extravaganza, in the making of which the ingenuity and inventiveness of technical forces were employed without stint of effort or cost … Some of the scenic passages are so beautiful in design and composition as to stir audiences by their sheer unfoldment.

That pretty much sums it up.

Few things are as magical as the Wizard of Oz, so it only makes sense that its vibrant fantasy world would translate perfectly into a theme park.