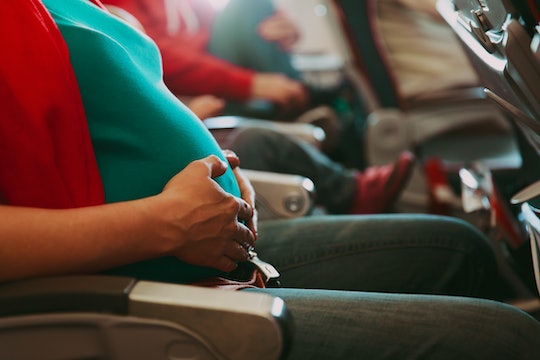 Eek, This Woman Faked A Pregnancy & Actually Documented It

When it comes to traveling, there are definitely a lot of ways to save money. You can compare costs for lodging, earn points through the responsible use of a rewards credit card, or even find certain deals specifically for families. However, one travel journalist took this concept to a whole other — and slightly tone-deaf — level. This woman reportedly faked a pregnancy to avoid travel fees, and TBH, it's less creative as it is slightly offensive.

While boarding a flight, CNN reported that journalist Rebecca Andrews decided to take it upon herself to shove excess clothes and electronics that she could not fit into her bag under her shirt, faking a "pregnant" stomach. Why? Well, she didn't want to pay the additional fees for overweight luggage. Eventually, an airline stewardness noticed the edge of her laptop sticking out, and the jig was up.

"I have a small frame and decided pretending to be preggo was the most believable route to a successful hack," Andrews told CNN Travel. "But in all seriousness, I think it is the laziest idea I have ever had — a woman's body can create human life, so exploiting this unique ability we have to save myself $60 was just obvious. It's quite an uncreative hack, really."

The whole scenario may have not earned national news headlines... had Andrews not decided to share her "hack" through an IG TV video.

In the video, which was posted to her personal page, shows Andrews strategically placing items such as a computer charger or other personal essentials in a rounded form over her stomach, and then placing a thick sweater over it. "Getting pregnant to save $60... When you don’t want to pay the excess for overweight carry," she wrote in the caption, before tagging it "#travelhack #flighthacks and #getpreg."

Aside from the obvious — doing this prior to security wouldn't work, as the items would be revealed through the body scan — it's a pretty morally and ethically objectionable move as well.

It seems followers agreed. "You have just shown the world your character, upbringing and standards. Lies and dishonesty to save $60 and then call it a hack?" one commenter shared. "It's not smartness. Rather we would call it fraud or cheating," said another. "You gotta keep these secret! Or they’ll start strip searching pregnant women to prove it!" another laughed, though that's not very funny, either.

It's unclear as to whether or not Andrews' video was meant to be satirical or humorous, but given that she did actually try to pass as pregnant in an airport to save money, it doesn't seem very humorous.

It should honestly go without saying why this is a super tone deaf thing to do, but in case it doesn't: pregnancy is a real and physically challenging thing to go through. Faking it to save yourself a few fees for an oversized bag is, well, kind of unfair to everyone else who did have to pay. Dishonesty is never a good look, and lying about having a baby (or at least, trying to) is absolutely not a "hack."