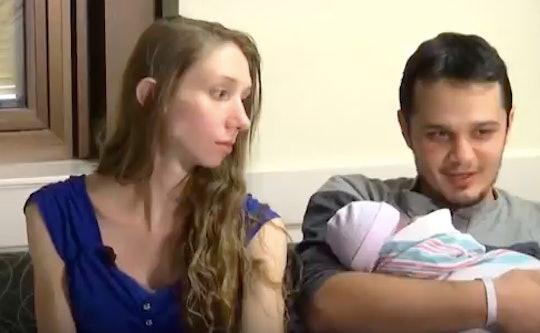 If you want proof that 2018 is going to be just as weird as all the years before it, news is circulating that a woman gave birth during a police chase, like she was in some sort of action movie or something. Luckily, everyone is safe and sound, though it could have been really dangerous. Do not try this at home, expectant parents, no matter how stressed you are.

Tiffani Von Glahn was being rushed to a Charleston, South Carolina hospital by the baby's father, Carl Alewine, according to ABC News affiliate ABC 15. He was reportedly going about 90 or 95 mph, so a police car started following them, attempting to pull them over. Alewine asked Von Glahn if she wanted him to pull over, but, as she told WCBD, she told him to keep going.

Von Glahn was told that there could be complications during delivery, so she wanted to get to the hospital as soon as possible, speeding tickets be damned. She explained to WCBD, "The way she was sitting at the time, she would’ve gotten stuck and I would’ve had to have a C-section. So I was thinking there was no way I could have her naturally."

So she and the baby's father sped on, as more and more police cars joined the "chase."

According to Us Weekly, the new mom said eventually there were around 20 police cars surrounding the vehicle, boxing it in. They had no choice but to stop. The cops put handcuffs on the baby's father, reportedly for safety reasons, since some people falsely claim they have a pregnant wife, according to Von Glahn. Once the police realized what was happening, according to WCBD, they went into baby delivering mode.

Baby Anastasia was born right there on the interstate, on the hood of her parents car, according to the New York Post, as Alewine explained:

I’m sitting there, watching her born on the hood of the car, fireworks going off in the background because it’s New Year’s, and then they let me out of handcuffs, and the cops started clapping and congratulating us.

Luckily, despite the possible complications, she was born perfectly healthy.

"It happened to fast," Alewine told KGW 8 News. He and Van Glahn both still seemed to be in shock that their baby's birth really went down as if it was a scene out of some action flick. Who really thinks that they're going to be speeding down the interstate like that to get to the hospital?

The family is very privileged to have such a happy ending to their story, and one that Anastasia will likely enjoy when she grows up. Because it could have gone an entirely different way if police officers had assumed that Alewine was armed.

There were almost 1,000 people killed by police in 2017 and one in five of them were black, according to The Washington Post's database of fatal police shootings. Traffic stops are especially deadly for black men and people of color, if only because they're more likely to be pulled over than white people are, according to the Bureau of Justice Statistics website, which leads to more interactions with the police.

If baby Anastasia was being born to parents of color, they might have been way less likely to have continued speeding, collecting so many police cars around them. Or the outcome once they pulled over could have been very, very different. Luckily, that wasn't the case and everyone has reason to celebrate and a good story to tell. May all the traffic stops for speeding, pregnant women or not, go this smoothly this year.