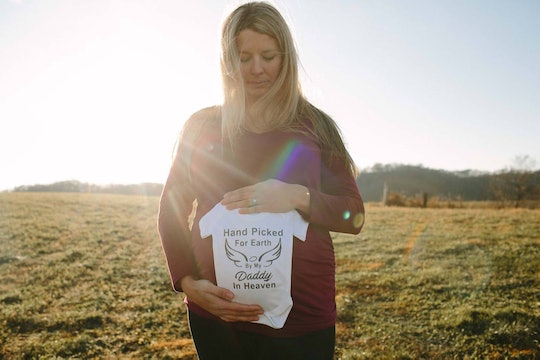 Kelly Luethe was 18 weeks pregnant with her third child when her husband, Jarrett, tragically died in a car accident in August. Last month, the Wisconsin widow decided she wanted to have professional pregnancy photos taken — even though she had never done so with either of her two older children. The original plan was to Photoshop a faded image of Jarrett into the scene, so the father could still be a part of this special experience. As it turns out, though, Leuthe feels Jarrett was there with her all along. The mom-to-be says her late husband's spirit appeared in her maternity shoot, and the evidence will give you chills.

Photographer Jessica Brandau shared a few images from the touching session on the Facebook page for her photography business. There, she described the events that unfolded — and ended up creating a truly moving finished product, sans the Photoshopping of Jarrett into the images. "As we were doing the shoot I noticed that a rainbow had popped up in a few of the photos," Brandau wrote. "Kelly and I talked about how neat/cool/weird it was, and I literally had goosebumps/was on the verge of tears for most of her session."

What was especially symbolic about the rainbows is that Kelly and Jarrett had previously experienced a miscarriage, according to Parents. So the son Kelly is currently carrying — who will be named after his late father — is their rainbow baby. "When Jessica mentioned a rainbow showing up, and then showed me, I noticed it was right above my belly," Luethe told Parents. "This child was our rainbow baby, and I immediately thought of that, and then I thought Jarrett had to have had something to do with it. Instantly gave me chills and made me teary-eyed. I knew he was with me then." She continued talking about her husband, who died at age 26, according to Fox KTVU:

I miss him terribly, and he would have moved mountains for me while he was still alive and he’s still taking care of me after he has passed. Our love was something I never dreamed I could have had. He was an amazing father and husband.

When Brandau got home to take a better look at the images after the emotional photoshoot, she was in for a bigger surprise. "Imagine how insane it was when I opened up the files on my computer and realized that the rainbows and orbs (yes I totally believe in orbs. Read up on them if you haven't heard of them!) show up in almost all of the photos that we took that day," Brandau wrote on Facebook. According to Everydayknow.com, green orbs are believed by some people to indicate the presence of a human spirit. "They are happy and visiting this word with the intent of love and happiness," the website explains.

Even more chilling? Throughout the shoot, Luethe moved around quite a bit, changed angles and even changed locations. Nevertheless, the rainbow and green orb persisted. "I know that some will chalk it up to lens flare and light refraction, but in the time that I have been photographing professionally, I have never had it show up as prominently -- and in every single photo -- the way that it did in Kelly's photos," Brandau told Parents.

Now, I'm not usually a supernatural, orb-seeking person — but it's difficult to deny how amazing these photos are. Whether or not you believe in ghosts, the coincidences here are remarkable. And for Kelly, the experience has been incredibly cathartic. "There is something much bigger out there and you can take my experience however you want but I know my husband is my and our kids' guardian angel now," she told CafeMom. "He is so deeply missed, and to have this happen warms my broken heart. I needed this from him. He is still taking care of me even after he has passed."