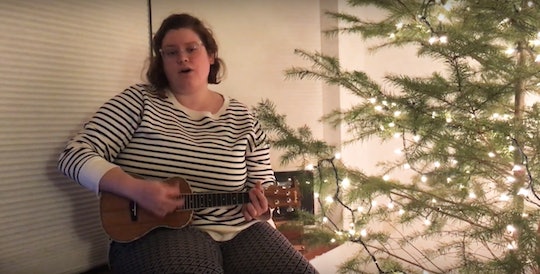 This Woman Sung "Hotline Bling" With A Christmas Twist & Honestly, It's A Bop

It's the holiday mashup you didn't even realize you needed: on Twitter this week, writer and musician Becca Rose shared a video in which she tested out a Tumblr theory that Drake's 2016 hit, "Hotline Bling" could probably be sung to the tune of perennial Christmas staple "Hark! The Herald Angels Sing," according to Mashable, due to the fact that they actually have the same number of syllables. With a little help from her ukulele, Rose confirmed the rumor was true, and now, this woman singing "Hotline Bling" as the Christmas carol has pretty much won the internet's entire heart.

When Rose first posted the video, she joked that "took [the Tumblr post] as a personal challenge" to determine if, indeed, the two songs could work interchangeably. And the result was glorious: sitting by her Christmas tree, Rose sang "Hotline Bling" to the tune of "Hark! The Herald Angels Sing," and the seamless overlap between the two songs created a totally hilarious result.

The video has now been seen over 60,000 times, inviting almost-entirely-positive commentary, and honestly, it's the kind of feel-good holiday social media moment we could probably all use a little more of in our lives right now.

Rose later tweeted that she made the video simply because she thought it was funny, but judging by the reaction to the clip, so did pretty much everyone else. And so, she took it upon herself to do the world yet another brilliant favor, and filmed a second video of — you guessed it — "Hark! The Herald Angels Sing" sung to the tune of "Hotline Bling" (and believe it or not, it might be even funnier than the original).

Even though it's practically impossible to not smile while watching either version, Rose tells Romper that she really wasn't expecting the clips to go viral the way they have, and joked that, at 60,000 views, the first video already has "about 59,990 more views" than the videos of her singing usually receive.

In fact, she only really intended for her friends to see the video and have a laugh, but it wasn't long until it began taking on a life of its own. Rose tells Romper, "When some news station in Canada said they played it on their morning show, I realized 'wait, this might be going viral.'"

Though she may not have anticipated the response, Rose did say that she has one specific dream in mind now that her music has garnered her some attention. Rose tells Romper she would love for the viral video to land her a spot on The Ellen DeGeneres show, and though producers haven't yet been in touch, the video's popularity (and sheer entertainment value) means it doesn't seem like an entirely outlandish idea.

Rose also said she doesn't particularly have any immediate plans to share anymore weird musical mashup videos, though it's certainly not out of the question. But that definitely doesn't mean there isn't already plenty of other clips available to peruse.

Rose, who also plays guitar, banjo, and mandolin, and writes her own music, has uploaded tracks to her SoundCloud page, including a cover of "Have Yourself A Merry Little Christmas," if the viral Twitter video has left you in the mood for more holiday music.

Perhaps the best part of the entire story though? Rose tells Romper that, while social media isn't always the friendliest of places, she actually is yet to receive any nasty comments from internet trolls. Rose said, "I'm not surprised that so many people like it, because it is funny! But I am shocked that it's been so widely seen and I still haven't had a single mean comment."