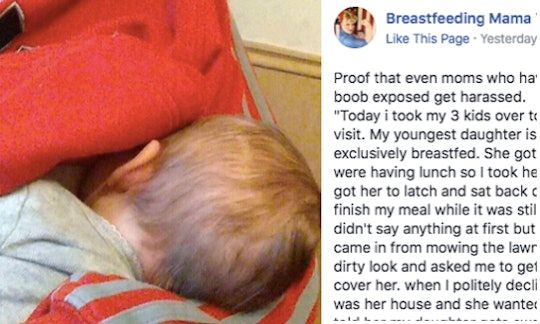 As far as we've come in spreading awareness for the benefits of breastfeeding, we still have a long way to go in normalizing it. The sight of a mother feeding her baby at the breast — whether covered or not — should never be a reason for shaming or forcing her to move elsewhere. Unfortunately, in our society breasts are still sexualized to the point of some people forgetting their biological purpose: To feed children. What's more, nursing moms can't always count on other women — sometimes even their own mothers — to support their right to breastfeed wherever they may be. For example, this woman says she was kicked out of her own mother's house for breastfeeding and the reason why will make your blood boil.

On Sunday, an anonymous mom of three shared her infuriating story with the Breastfeeding Mama Talk Facebook group. This nursing mom shared she was eating a meal at her mother's house when her 3-week-old daughter got hungry. After she excused herself from the table to help her newborn latch in the living room, the nursing mama returned to finish her meal.

"My mom didn't say anything at first but when my step dad came in from mowing the lawn, she threw me a dirty look and asked me to get my blanket and cover her," the anonymous breastfeeding mom wrote. "When I politely declined she told me it was her house and she wanted me to cover up. I told her my daughter gets sweaty and uncomfortable under the blanket and if it was that much of an issue that I wasn't going to do that to her, we would leave and she said fine leave."

When the anonymous mom went to get her older two children ready to leave, the grandma allegedly said: "You're really going to leave because you're in MY house and I want you to cover up? I don't care how you nurse in your own home, but at my house you need to cover up. No one wants to see that."

To add insult to injury, as the mom revealed, the children's grandma also put a guilt trip on her breastfeeding daughter while she was attempting to leave. "She made me look like the bad guy to my older 2 children by telling them I was leaving because I was mad at her and she was sorry they couldn't stay to watch the end of the movie she just put on for them," the mom wrote. "This is what it looked like while I fed my daughter."

"No one wants to see that." Did this grandma really go there? She's feeding her baby, for god's sake, not doing a strip-tease at the dinner table. Newsflash: You can literally see nothing. As seen in the photo, no nipple, no areola, not even a speck of the fleshy part of the boob to be found. So what exactly, didn't anyone want to see?

Thankfully, plenty of commenters stepped to express their outrage at this breastfeeding mama's infuriating experience. "What a load of crap. Your mom needs to go get her undies out of a twist and stop sexualizing her own daughter's chest that is feeding her own grandkid," one Facebook user wrote.

Another commented chimed in with, "It's one thing for her to ask to cover up (which was uncalled for and rude) but to be so immature to make slide remarks to the kids, is completely unacceptable. I wouldn't return until she apologized."

Yet another commenter wrote, "If it happens again, say 'kids, we're leaving because Grandma won't let your sister eat in her house.' good for you!"

That's just a small sampling of what commenters had to say. In less than a day, this mom's post has gotten nearly 3,000 reactions on Facebook in addition to the hundreds of comments. This story has clearly struck a chord with countless other moms.

When I made the decision to breastfeed my first baby, I had no idea what I was getting myself into. No one in my immediate family had breastfed, and I'm pretty sure I had never even (knowingly) witnessed a mother nursing her child. Still, neither of my parents ever said a word to me about covering up or going somewhere else to feed my baby. Although my mom fed all of her kids formula from day one, both she and my father respected my decision and never acted like it was a shameful thing for me to nurse uncovered. (Because like the baby in this story, my firstborn refused to be covered.) Sure, they may have been uncomfortable at first. But being mature adults, they realized that making sure their grand-baby was fed was more important than their feeling slightly awkward — and eventually, it just became the norm.

Honestly though, I would have been extremely upset if anyone had shamed me during those early breastfeeding days, when I was still trying to figure everything out. But my own flesh and blood? If women can't count on their own mothers to support them while breastfeeding, who can we count on? Through the years, I have gained the confidence to stand up to anyone who has a problem with my breastfeeding — and quite frankly, my reaction wouldn't have been as nice as the mom in this story.

Look, I get the whole "it's my house, so it's my rules" of it all. But breastfeeding isn't like asking someone to take off their shoes at the door. It's feeding a baby. Literally one of the most innocent things a person can do in this life. So grandmas, aunts, cousins, and complete strangers, listen up: If a nursing mother somehow offends you, simply look away and zip it. Because there's simply nothing gross or inappropriate about nourishing a child.