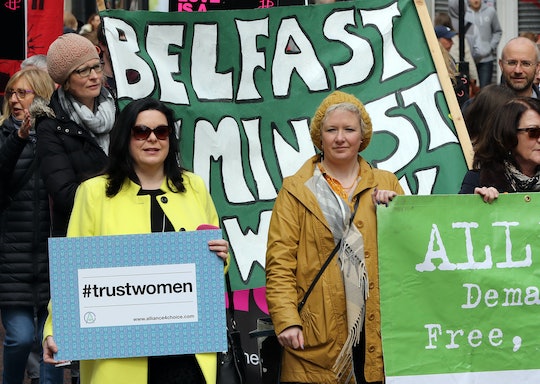 This Woman Went Undercover At A "Pregnancy Counseling Center," & Was Told Outrageous Lies

A reporter for The Times recently went undercover at a "pregnancy counseling center" in Dublin, Ireland, and what she recorded was shocking. Similar to U.S. "crisis pregnancy centers," the establishment, called The Women’s Centre, claims to provide impartial advice to women seeking abortions, but is actually a front for an anti-abortion organization called the Good News Network. The woman who identified herself as a counselor told the reporter, who presented herself as seven weeks pregnant an in need of an abortion, one outrageous lie after another in an attempt to change her mind.

Abortion is illegal in Ireland unless the woman's life is in danger, and no exceptions are made for cases of rape, incest or fetal anomaly. However, Irish women are permitted to travel abroad to procure a legal abortion, and according to the Irish Family Planning Association (their version of Planned Parenthood), an estimated 5,000 do so each year. The IFPA counsels women on obtaining abortions in Britain, where it's legal up to 24 weeks. Unfortunately, according to The Times, there are no laws regulating so-called pregnancy counseling centers, and The Women’s Centre used deception and intimidation to try and prevent the reporter from accessing safe and legal health care.

The "counselor" reportedly showed the reporter a photograph of a fetus aborted at 20 weeks, which, first of all, is very misleading considering her supposed gestation at the time was just a few weeks. Furthermore, gory pictures have no bearing on whether or not someone should choose to have a medical procedure done; nobody would force a heart transplant patient to look at pictures of an open chest cavity or a donor cadaver before going through with their treatment. The "counselor" also implied that the reporter may be a "psychological risk" because she requested an abortion.

The reporter was also told the reporter that seven or eight weeks gestation was "way too late" for a chemical abortion, when mifepristone and misoprostol are routinely prescribed up to 10 weeks gestation. She was told that the "baby" would feel considerable pain "due to the sensitivity of the developing nervous system," when in actuality, an undeveloped nervous system would be unable to transmit any pain at all. As for the reporter herself, "the first side-effect is death," according to the "counselor." According to a National Institutes of Health study that examined mortality rates spanning 1998-2005, the incidence of death was 0.6 deaths per 100,000 abortions in the United States, versus 8.8 deaths per 100,000 live births. One could infer that British rates are similar.

But wait, there's more! The reporter was also told that her breasts and ovaries were connected (they are not), that she'd be more likely to commit child abuse or neglect after an abortion (the opposite is true), and that when a woman goes "from being pregnant to unpregnant so rapidly, your cells can become damaged." That certainly doesn't bode well for any woman who's ever had a miscarriage, stillbirth, or C-section, does it? Not true, obviously, and it's rather curious that someone who supposedly has 18 years experience in prenatal counseling would use a made-up word like "unpregnant." The reporter was also sent home with a pamphlet that threatened some ridiculous side effects such as "suicidal impulses, an intense interest in babies, constant sighing, guilt, crying, swallowing, a preoccupation with death, a loss of interest in sex, a coma, loss of organs, a desire to end relationships, a loss of maternal instincts and lower self esteem."

The good news is that support for legalization of abortion in Ireland is gaining traction, despite the attempts of The Women’s Centre and the Roman Catholic Church. And there's even hope for women who can't afford to fly to London to exercise their basic human rights; Women on the Web, an international non-profit group that provides access to mifepristone and misoprostol, may be able to help. Women of Ireland would do well to remember that the Irish Family Planning Association provides real abortion assistance, and pregnancy counseling centers should be avoided at all costs.