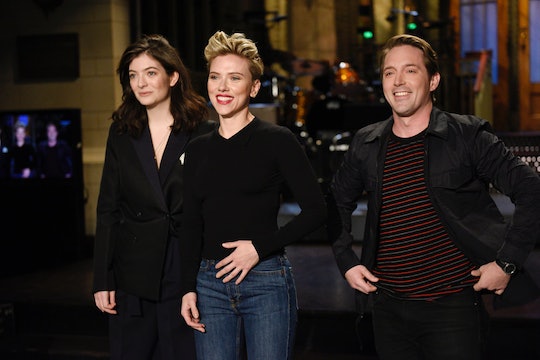 'SNL' Explains Mansplaining So You Don't Have To

Mansplaining is one of those things that's pretty hard for women to explain to men. It's more of a "you know it when you hear it" phenomenon. Which is why the Saturday Night Live Women's Day sketch was so perfect. I seriously suggest that as a woman, you bookmark it for future use. The sketch began almost seriously, with Aidy Bryant and Scarlett Johansson explaining that the entire cast of SNL participated in the International Women's Day strike this week. They added that because most of the writing gets done on Wednesdays, they weren't able to participate, but the male cast members assured them that they would write something for them.

Bryan and Johansson assured viewers that the men wrote a sketch that features the entire female cast and addresses important feminist issues. Sounds good, right? Not so much.

The sketch was set in a restaurant with two cisgendered couples on a date, played by Bryan, Johansson, Beck Bennet, and Kyle Mooney. Bryan and Johansson squint at the teleprompter, trying to see where their lines are. There aren't many. The sketch is just a basic play on the Bechdel test, where the two white men at the table start discussing the important "female issues" they promised.

But the women are totally left out of it. They men are upset because they saw a woman get harassed on the street on the way there. "Do you know almost every woman in the restaurant probably has a story about micro aggressions," they marvel. The camera pans to the as-promised "whole female cast" before zooming back in on the two men. They go on to discuss the gender wage gap and all of the other injustices that women have to put up with. The women's only line? "Thank you for saying that," said in unison by Bryan and Johansson. Oh, snap.

At the very end, Lorde came out to sing a song for the women that the men lined up. But even the pop star couldn't perform her own song as Bennett and Mooney got up and started singing over her. The sketch is the definition of what's wrong with even the most well-meaning male allies.

It's nice to see (we guess?) men paying attention to feminist causes, but not letting women speak for themselves and talk about their own experience is just as sexist as actively holding women down. This has been a major theme on SNL recently. Last week, they aired a sketch with Cecily Strong deflecting "male feminists" (all humans should be feminists, no?) at a bar. It turned out that the men were using their feminism to pick up women and became aggressive, violent, and lewd when she turned them down.

Apparently, the women (and woke men) in the SNL writers room were, in fact, able to write sketches this week. Keep it coming, ladies.