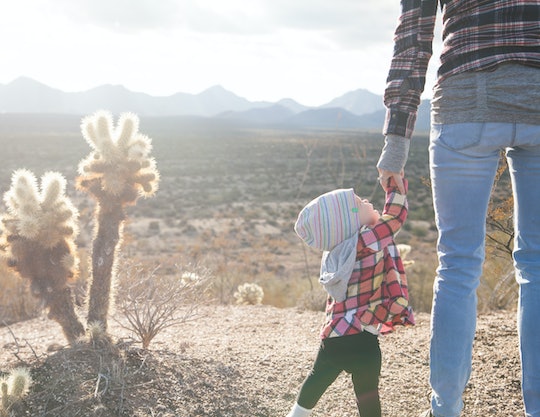 Pretty much all moms everywhere can agree that, in one way or another, motherhood is really freaking hard. But despite that virtually-universal truth, the unspoken debate over who has it easier — working moms or stay-at-home moms — still seems to linger. I guess it's only natural to assume the grass is greener on the other side of motherhood: that working moms get to "have a break" from parenting unlike SAHMs, who have to deal with their kids all the day, or that SAHMs get to, well, stay at home, and don't have to deal with the rigors of holding down a job and being a parent. But, the truth is, no matter how it looks from the outside, all mothers (and fathers, and anyone else who happens to be raising tiny humans) struggle to balance everything on their plate at least some of the time. One working mom's viral Facebook photo is a great example that, behind the scenes, parenthood is a challenge for everyone.

According to Cosmopolitan, Australian blogger (and mother-of-two) Rachelle Bingham took to her blog's popular Facebook page recently to share a straight-up, honest photo of what her life as a seemingly-glamorous working mama really looks like (spoiler alert: her car looks exactly how you'd expect it to). In the post, Bingham wrote,

To anyone who thinks that working mums have it all together. Ummm no...... I have just arrived home at 5.10pm. I woke up with my 3 year old at 4.30am, got kids ready, went to childcare, drove an hour in traffic and started work at 8am - in a normal job, nothing glamorous or exciting. I still have to do baths, make dinner and make a slice for work tomorrow who are having a 'fun' morning tea.

The post goes on to discuss the state of her car:

My car is dirty...filthy dirty. Filled with toys, juice boxes, lolly wrappers, red bull cans and way too many sultanas to even bother cleaning.

And her kids? Their needs feel overwhelming by the end of a long work day:

Mr 3 (who is happy to see me) has spent the last 15 minutes asking Why? Why?How? Why? About various things. This is cute but I am super tired. Miss one is upset and tired/hungry because daylight savings threw her out of routine...it may appear that working mums have it together but we are really all just running around, muddling through and trying to make it all work.

According to the Daily Mail, Bingham took the snap after she picked her daughter up from daycare and noticed what a mess her car was. She told the newspaper,

I often think 'how embarrassing is my car' and then I thought how other mums probably feel like this because my car is filthy no matter how much I clean it.

My children get in the car and they're eating and it's all crazy so I thought 'why not share and see if people can relate' and obviously they can.

In fact, saying that others can relate is probably an understatement. Bingham's Facebook post has earned over 40,000 likes, more than 6,700 shares, and 2,300 comments — mostly from other women thanking Bingham for being so honest about the reality of what she (and so many other mothers) go through each day.

The response from Bingham's photo proves, perhaps more than anything, that there are countless women out there who understand what it's like to feel like you don't have it nearly as together as you feel like you should, and it also speaks to how easy it really is to assume that other people have it better, or that their lives are so much more privileged because of how it looks on the outside.

And, judging by the reactions Bingham has received, it seems like there really isn't anyone who isn't affected by the crazy expectations that parents are supposed to meet. These days, both parents often need to work to support their families, but of course, they're still expected to be super involved, rock star parents who can manage both aspects of their lives with relative ease. Then there are parents who stay home — either by choice or necessity — who struggle with the sheer mental exhaustion of taking care of kids all day, while also trying not to lose their own identities in parenthood, and probably, let's be honest, are feeling pretty lonely and isolated a lot of the time. And then you have single parents, foster parents, grandparents-as-parents, military parents... I mean, are there any parents out there who can't relate to feeling like it's impossible to stay on top of everything as well as you'd like to?

If nothing else, Bingham's post is a perfect reminder that, as parents, we really are on the same team as one another, and that judging each other achieves absolutely nothing. It really does take a village, after all. So maybe it's time we accepted that, when it comes to parenting, nobody actually has it easier — and maybe that there's no shame in having a filthy car (because, uh, guilty as charged).