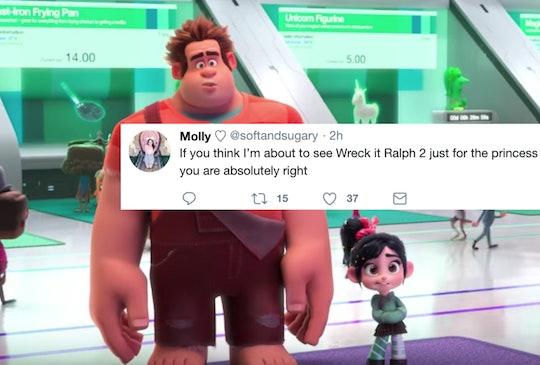 People seem to love Disney princesses, no matter what age they are. Maybe it's because, as children, we idolized them for their stories (and the fact that they're actually princesses). And as kids get older, that obsession sticks with them. And you can't blame them — Disney animated films are classics. Because of this, it shouldn't come as a surprise that this Wreck-It-Ralph 2 photo with all the Disney princesses has Twitter beyond excited for the movie to come out.

In the first Wreck-It-Ralph film, audience members saw the main character, Wreck It Ralph (along with his trusty sidekick Vanellope von Schweetz) meet many beloved video game characters, according to Games Radar, in his quest to become a hero and dispose of his status as a villain, according to Roger Ebert. In the sequel, Wreck-It-Ralph 2: Ralph Breaks The Internet, it appears as if Ralph will do the exact same thing, but through the internet. And this time, the cameos in the film are being made by beloved icons in general, like Disney princesses.

In a new still from the movie released on Tuesday, according to USA Today, fans got a glimpse into what the new movie has in store. In one of the stills, Vanellope stands in a room surrounded by every Disney princess, who is each occupied with their own thing and looking at Vanellope a little apprehensively. In the still, you can see Cinderella playing with Pocahontas' hair, Belle reading a book, and Jasmine kneeling beside a window — all of which speaks true to their personalities.

Needless to say, people on Twitter were beyond excited to see this shot, taking to the website to freak out.

Although not everyone was excited (come on, Disney, where is Mulan?).

Still, some people were begging Disney to take their money, like, right now.

Some people were able to watch this scene (which is described as "total fan service," according to MTV) last year during the D23 conference (also known as Disney's fan expo) in Anaheim, California. To say the scene went over well at D23 would be an understatement. "I saw a woman in her chair sort of hyperventilating when it was over because she couldn't believe what happened," the film's director, Rich Moore, told Entertainment Weekly.

But those Disney diehards who didn't get to go to the conference, but are still dying to see more from this scene will have to wait just a bit longer. Wreck-It-Ralph 2 doesn't premiere in theaters until Nov. 21, according to Cinema Blend, which happens to be Thanksgiving day. Although this might seem like a long ways away, at least the film's premiere will give people another reason to look forward to the holidays.

But until then, fans can fill up on all of the Wreck-It-Ralph 2 tidbits that they can handle until the film's premiere date — and from the sounds of it, they'll definitely want to. The film's directors were able to get every single original voice actress of each Disney princess to reunited for the scene, according to Entertainment Weekly.

With all of that known, diehard Disney fans (and princess fanatics) will likely be talking about this scene for weeks after they see it on the big screen. And judging by the reaction from fans on Twitter just from the still, it can only be epic.