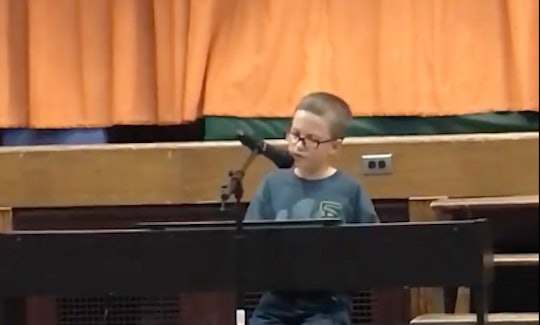 I don't know about the rest of you, but John Lennon's "Imagine" never fails to give me all sorts of feelings. Now, imagine a 10-year-old boy covering it with a mix of pure sincerity and real talent. Are you crying yet? Because this young boy's cover of "Imagine" at a school talent show will absolutely give you chills, especially if you're already a fan of the piano song.

Adam Kornowski, a fourth grader in Chisago City, Minnesota, decided to perform "Imagine" for his school talent show, and did so with the sort of honesty only a kid can exude. At the time, he was just performing for his classmates, teachers, and parents, and that's probably as many people as he thought would ever see it.

But Adam's mom, Michelle Cavarnos Kornowski, took a video of the whole performance and posted it a few weeks ago on Facebook so that her friends could see it too, according to CNN. She had no idea just how far the video would reach, and now that the video has gone viral, the number is in the millions.

Take a look for yourself in the video, and be awestruck by not just Adam's performance of "Imagine," but also the fact that an entire room full of students is fairly quiet for the entire thing. That's pretty impressive all by itself, but Adam's performance absolutely deserves your applause as well. (And check out the super professional bow at the end!)

As of Tuesday night, the video had over 11 million views on Facebook. Talk about your epic audience. There are a lot of singers and artists who would kill for that kind of exposure, and all Adam did was perform a sweet song for a talent show, albeit very well.

Adam's mom explained to CNN that she's not a social media influencer with a large following or anything like that, and that she certainly wasn't expecting many people to see the cute video on her Facebook profile. She told the outlet:

I think, originally, two of my friends shared it, and were very excited about it.

But that number obviously blew up very, very quickly. The video had been shared over 270,000 times by Tuesday night, with no signs of slowing down anytime soon.

In the caption for the video, Cavarnos Kornowski wrote that when Adam sang "Imagine" for the talent show, "There wasn’t a parent in the room with a dry eye by the end." She also said he got a standing ovation, and that a woman stopped to tell her she would buy the cover on iTunes if Cavarnos Kornowski uploaded it there. But who needs iTunes when you have social media video fame?

Adam is reportedly "feeling wonderful" about the way people have responded to his performance of the John Lennon classic, according to People. And in a world where the internet can sometimes be a cruel place, it's definitely nice to know that so many people have responded so positively to a cover of a song about peace performed by a fourth grade kid.

John Lennon actually composed the song in one session, according to Biography. It was always meant to be done with simplicity and sincerity, and its message of love and hope has resonated for people all over the world for many years. Is it any wonder that a cover of the iconic song done by a child has hit a chord with so many people?

Music apparently comes naturally to Adam — his dad is a musician, and he's been teaching Adam since he was 5, according to CNN. But even the most talented of musicians can't always make you feel the emotions I felt watching that video of Adam singing "Imagine."

For what it's worth, it sounds like Adam isn't letting his fame go to his head. His mom told CNN that Adam is still mostly focused on normal kid stuff, like baseball and looking forward to summer vacation. It sounds like the 10-year-old from Minnesota isn't fazed at all by suddenly becoming famous on social media, and probably has no idea how many people around the world have been reduced to blubbering messes after watching his performance. It's probably for the best, really.