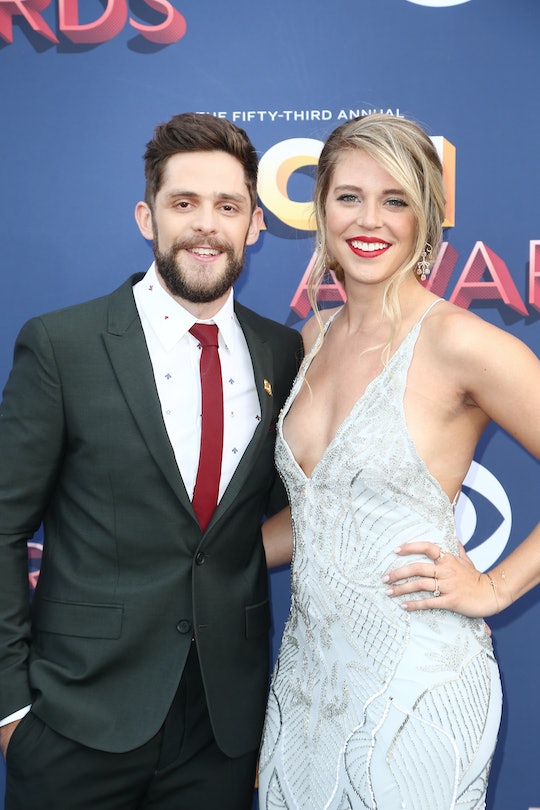 It looks like the 2019 celebrity baby boom is going strong (and no, it's not another Duggar pregnancy announcement, I promise). That's because country music star Thomas Rhett and his wife Lauren Atkins are expecting their third child, news they shared via a fun social media post.

Rhett, the son of country music singer Rhett Akins, revealed the happy baby news on Tuesday, July 23 via Instagram. “Excited to share that I will now be paying for 3 weddings," Rhett, 29 captioned the post. Rhett's Instagram post also included a family shot in which the couple's two daughters, Willa Gray, 3, and Ada James, 2, place their hands on Akins' belly. A second photo shows a sex reveal involving mini cannons and pink smoke.

“I feel so blessed to say that our third child is on the way and it’s a girl!!" he continued. "I love you so much @laur_akins. WG and AJ, y’all are gonna be the best big sisters! Bring on the crazy.” Aww! How cute.

Meanwhile, Akins shared the pregnancy and sex reveal, along with her own message, via Instagram as well. "We decided we didn’t have enough princess dresses around the house so we’re adding another Akins baby girl to the family early next year," the expecting mama wrote. "Despite Thomas Rhett’s initial shock (swipe to see video) we are absolutely over the moon for our baby girl!"

Lauren went on to share that Willa and Ada are very excited about their little sister on the way, a secret the family had struggled to keep under the wraps. "It feels like we have been hiding this secret for an ETERNITY," Lauren added. "And I’d like to apologize to everyone I’ve canceled on, said no to or just been MIA, but for a second there I wasn’t sure if I was pregnant or just puked for a living. But she’s soooo worth it."

She concluded her sweet message with a joke about Rhett, writing: "We are SO excited! & if you need TR you can find him in the camping section at REI buying dude things.......jk, he’s excited too."

"I AM CRYING TEARS OF JOY," one person wrote, while someone else said, "This is the cutest thing ever."

One especially dedicated fan chimed in: "Why did this make me cry, they are my favorite people in the world."

There's a chance Rhett's fans aren't too shocked by the pregnancy news because in June, the "Marry Me" singer opened up about having more kids one day. He told ABC News Radio:

If we stopped having kids now, I know I’d wake up at 45 and go, ‘We should’ve had five more.' Because I really do want to be able to sit at a Thanksgiving or Christmas table with the most gigantic family on the planet.

If you ask me, Rhett's hit song, "Life Changes" couldn't be more fitting for this time of his life — just saying. Congrats to the country star and his wife, Akins, on baby number three!