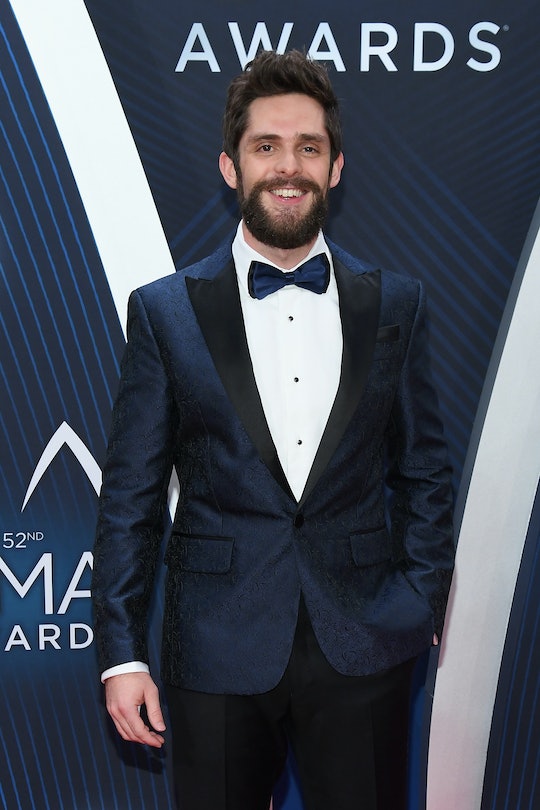 When it comes to parenting, so many of us find ourselves doing things we swore we never would, such as, for example, listening to "Baby Shark" for perhaps the hundred thousandth time in a week. But when it comes to bonding with kids, sometimes it's most important to make sure you're relating to them at their level, which is why Thomas Rhett's bedtime photo with his daughter proves great dads shatter gender stereotypes in the name of a sweet moment.

On Dec. 7, Rhett uploaded a photo of himself and daughter Willa Gray snuggling before bedtime, sporting matching pink bonnets. "Just a little night cap," he quipped in the caption.

Fans immediately started responding and applauding the new dad-of-two for his evident commitment to his daughter. Some even mentioned the importance of embracing bonnets for the care of black hair.

"This picture warms my heart! I am so happy that y'all are taking the time to learn about her hair and the importance of a bonnet," one comment read. "The bonnet is to protect the hair... African American hair looses moisture from the cotton pillowcases... This protects and keeps in moisture," another commenter explained to anyone confused about the significance of the moment.

Rhett and his wife Lauren welcomed Willa to their family last year, and their adoption story was one they've been willing to share with fans.

"On the way to the airport, it was like Christmas Day," Rhett told People after Willa was picked up from Uganda. "It felt like a dream. I’ve dreamed of us all being on the same continent for so long. It finally feels like everyone is where they’re supposed to be," Lauren added.

Prior to the news of the adoption, Lauren opened up about the family's struggles with infertility, Rare.us reported, ultimately concluding that they believe there was a greater purpose in them being unable to conceive right away.

“When I met Willa, her story was pretty intense,” Lauren told People about her daughter. “All orphans have heart-wrenching stories, but it felt like this specific baby was ours. I think that the Lord knew what he was doing when he did not let us get pregnant.”

Thomas echoed Lauren's sentiment, also telling People that his wife has this "amazing glow about her" when she was holding Willa while visiting her at the orphanage in Uganda, and that he just "felt like she was already [their] daughter in a weird way." He explained: "'I just blurted out, 'We should bring her home.'"

However, Willa's adoption was not the only happy news for the couple last year.

In fact, just shortly after deciding to adopt and beginning the paperwork, Lauren discovered that she was finally pregnant with another baby girl. This past August, E! reported that she delivered Ada James Atkins.

"I can't believe that we have two daughters!!" Thomas Rhett wrote on Instagram. "My wife @laur_akins labored almost 36 hours... She is by far the strongest human being I have ever met and I have a new found respect for moms around the world. We are so excited that Willa Gray has a baby sister! Thank you Lord and everyone for the prayers... #outnumbered."

Overall, it seems that the entire Akins (that's their last name!) family is the ideal example of how beautifully a family can come together from the places we least expect, at the times we'd least anticipate. Let's hope this is just the beginning of Thomas being #dadgoals for everyone out there.