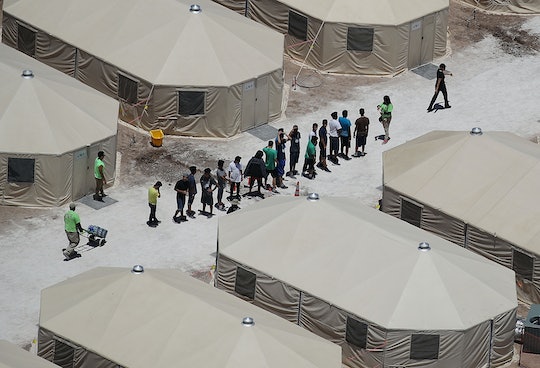 The Department of Health and Human Services (HHS) received thousands of complaints regarding the alleged sexual abuse of immigrant children in U.S. custody, according to documents obtained by Axios. The disturbing report alleges that 4,556 complaints were sent to HHS from October 2014 to July 2018, while an additional 1,303 complaints were given to the Justice Department during this same time frame.

Florida Rep. Ted Deutch, a Democrat, released the HHS' documents to Axios on Tuesday, shortly after he discussed the report in a House Judiciary Committee hearing. The hearing was in regards to the Trump administration's zero-tolerance immigration policy, which was first enacted in April 2018. One month later, the Trump administration — along with Immigration and Customs Enforcement (ICE) — began separating families at the United States-Mexico border.

Some of the reported complaints the Justice Department received accused staff members of "having relationships with minors, unwanted sexual touching and showing the minors pornographic videos," according to CNN.

Additionally, Axios found that between October 2014 to July 2018, 178 out of the 1,303 complaints were made against the adult staff, while 851 accusations were lodged against another minor. Other alleged sexual assaults were committed by 254 "unknown" perpetrators and 19 non-staff adults, according to Axios.

Regarding the documents, Caitlin B. Oakley, National Spokesperson, Senior Advisor; Office of the Assistant Secretary for Public Affairs, U.S. Department of Health and Human Services, told Romper in a statement:

The safety of minors is our top concern when administering our unaccompanied alien children program. Each of our grantees running standard shelters is licensed by the respective state for child care services. In addition to other rigorous standards put in place by the Office of Refugee Resettlement (ORR) at HHS’ Administration for Children and Families, background checks of all facility employees are mandatory...These are vulnerable children in difficult circumstances, and ORR fully understands its responsibility to ensure that each child is treated with the utmost care. When any allegations of abuse, sexual abuse, or neglect are made, they are taken seriously and ORR acts swiftly to investigate and respond.

As for the HHS' response during the House Judiciary Committee hearing, HHS' US Public Health Service Commissioned Corps commander, Jonathan White, claimed that most of the allegations were "unfounded." He said in reference to the Office of Refugee and Resettlement (ORR), according to CNN:

The vast majority of allegations prove to be unfounded when they are investigated by state law enforcement and federal law enforcement and the state licensure authorities to whom we refer them. It is important to note that I am not aware of a single instance anywhere of an allegation against the ORR federal staff for abuse of a child.

Following White's statement, Axios reported that in "many cases, staff members were removed from duty and ultimately fired" during the timeline outlined in the documents.

It goes without saying this report shouldn't be ignored. Hopefully, these recently revealed documents will prompt the HHS to launch thorough investigations into the allegations. Though there are practices in place to for immigrant youth and their care providers to report sexual abuse, more needs to be done to protect the most vulnerable.