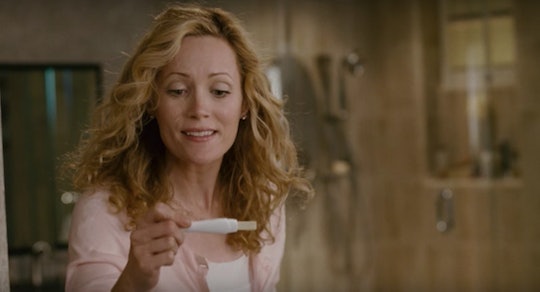 Women pee on pregnancy tests all year round — so much so that thousands of women are addicted to pregnancy tests, according to new research. This means that more women will find out they're pregnant on Wednesday than any other time of the year, according to the study of 1,435 moms conducted by parenting site Channel Mum. But taking excessive pregnancy tests has become a problem plaguing one too many women.

"Pregnancy test addiction" affects many hopeful women anxiously awaiting those elusive blue lines — these women are known as pee-on-a-stick or POAS addicts, according to VICE. They spend a shocking amount on pregnancy tests, taking as many as 20 in just a few days, VICE reported. Then, POAS addicts will discuss their results with other women on forum sites likes Fertilityfriend.com and Babycenter.com.

In fact, women take an average of six different pregnancy tests just to be sure, The Sun reported. The Channel Mum study found that seven percent take 10 tests while one in 20 will take 16 or more.

"[Continual tests] are expensive and unnecessary," Siobhan Freegard, Channel Mum founder said, according to The Sun. "If you are that anxious, then get professional support.”

But POAS addicts are not alone in their anxiety. Sixty-two percent of women keep taking tests even after getting a positive result because they worry that they've gotten a false positive and for the health of their pregnancy. One in 12 keep taking tests up until they have their 12-week scan. That's a lot, so women spend an average of $37 on tests, according to The Independent.

The addiction goes farther than that though. According to VICE, some women will even "tweak" what appears to be negative tests on Photoshop in order to reveal faint second lines.

Even though these women don't necessarily believe that they're indeed pregnant right away, just 26 percent of moms keep mum until their scans. One-third actually break the news to their family and friends as soon as they find out, and more than half of expecting parents spill the beans by the seven-week stage, even though the risk of miscarriage still remains high, according to The Independent.

They're mostly revealing their pregnancies online, too, so they're telling a lot of people, according to Metro. Just over half still tell their loved ones in person. Rather, three in five now break the news on social media, almost half of whom post a photo of their scan. Posting to social media is telling quite a big crowd with quite a high risk of miscarriage, but perhaps women are becoming evermore comfortable taking that risk as miscarriage becomes less of a taboo topic to discuss.

You can expect more announcements than usual on your Snapchat and Facebook feeds in the coming weeks as more than 10,000 women will take pregnancy tests on Wednesday, alone, which comes just over two weeks after National Baby-Making Day (Jan. 2), the most common day of the year for couples to try to conceive, according to Mirror. Around 5:36 p.m. Eastern Standard Time is the exact time scientists figure most women will be squatting over a toilet and peeing on a stick.