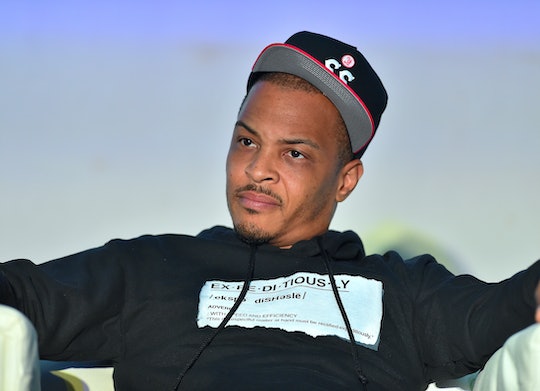 T.I. Having His Daughter's Hymen "Checked" Yearly Is Wrong On So Many Levels

Every person deserves the right to make their own decisions about their body and sex life, a sentiment that's clearly lost on rapper T.I., who takes his daughter to the gynecologist for yearly "hymen checks." Yes, you read that correctly. The "Whatever You Like" singer actually thinks it's OK to monitor his 18-year-old daughter's "virginity," treating her as if she's a piece of property instead of a person who can make her own sexual decisions. Sigh.

As Chrissy Teigen summed it up on Twitter, "def did not think we would be talking about hymens today. or TI." But that's the situation many people found themselves in Wednesday, following Clifford "T.I." Harris Jr.'s interview on the Ladies Like Us With Nazanin and Nadia podcast, where he casually discussed his daughter Deyjah's hymen. Because that's totally normal behavior for parents, right?

The conversation kicked off when the co-hosts asked T.I. whether he has had the "sex talk" with Deyjah yet. "Not only have we had the conversation, we have yearly trips to the gynecologist to check her hymen," he revealed, according to The Hill. "Yes, I go with her."

T.I. then provided a disturbing anecdote, revealing that after his daughter's 16th birthday party, he "put a sticky note on the door: 'Gyno. Tomorrow. 9:30.'"

At this point in the story I'm wondering: Isn't it illegal to access another person's medical records? And yes, thanks to a little thing called HIPAA, anyone over the age of 18 has to give their consent before a doctor can share their medical information with a family member. But coercing someone into providing this consent is a clear violation of the policy.

"So we’ll go and sit down and the doctor comes and talk, and the doctor’s maintaining a high level of professionalism," T.I. said about how he gets access to his daughter's records, according to The Washington Post. "He’s like, ‘You know, sir, I have to, in order to share information’ — I’m like, 'Deyjah, they want you to sign this so we can share information. Is there anything you would not want me to know? See, Doc? Ain't no problem.'"

T.I.'s representative did not immediately respond to Romper’s request for comment regarding his remarks.

Of course, T.I. failed to mention how Deyjah feels about this annual visit and it's quite possible she felt pressured to sign those forms. But unless the college student speaks out herself, fans can only make assumptions.

That all being said, it's almost impossible to sum up the wrongness about this situation (there's just so much to cover), but a few users on Twitter did a great job of pointing out the reasons for why it's problematic.

One user wrote: "This is VILE 1. She's 18 and a legal adult 2. There are loads of ways to break a hymen, and often girls don't even know they've broken it. 3. Why is it ok for a girl's father to be this invested in her vagina? Because it sounds creepy AF to me."

OB/GYN Jennifer Gunter, who shared an educational thread about the hymen, penned, "The hymen means nothing physically and hymen exams are medically not a thing and are unnecessary. And support a disgusting patriarchal trope."

There are plenty of other replies that hit the nail on the head, but the important takeaway here is people deserve to have autonomy over their own bodies. And as many fans already mentioned, T.I. needs to start respecting his daughter's right to privacy.