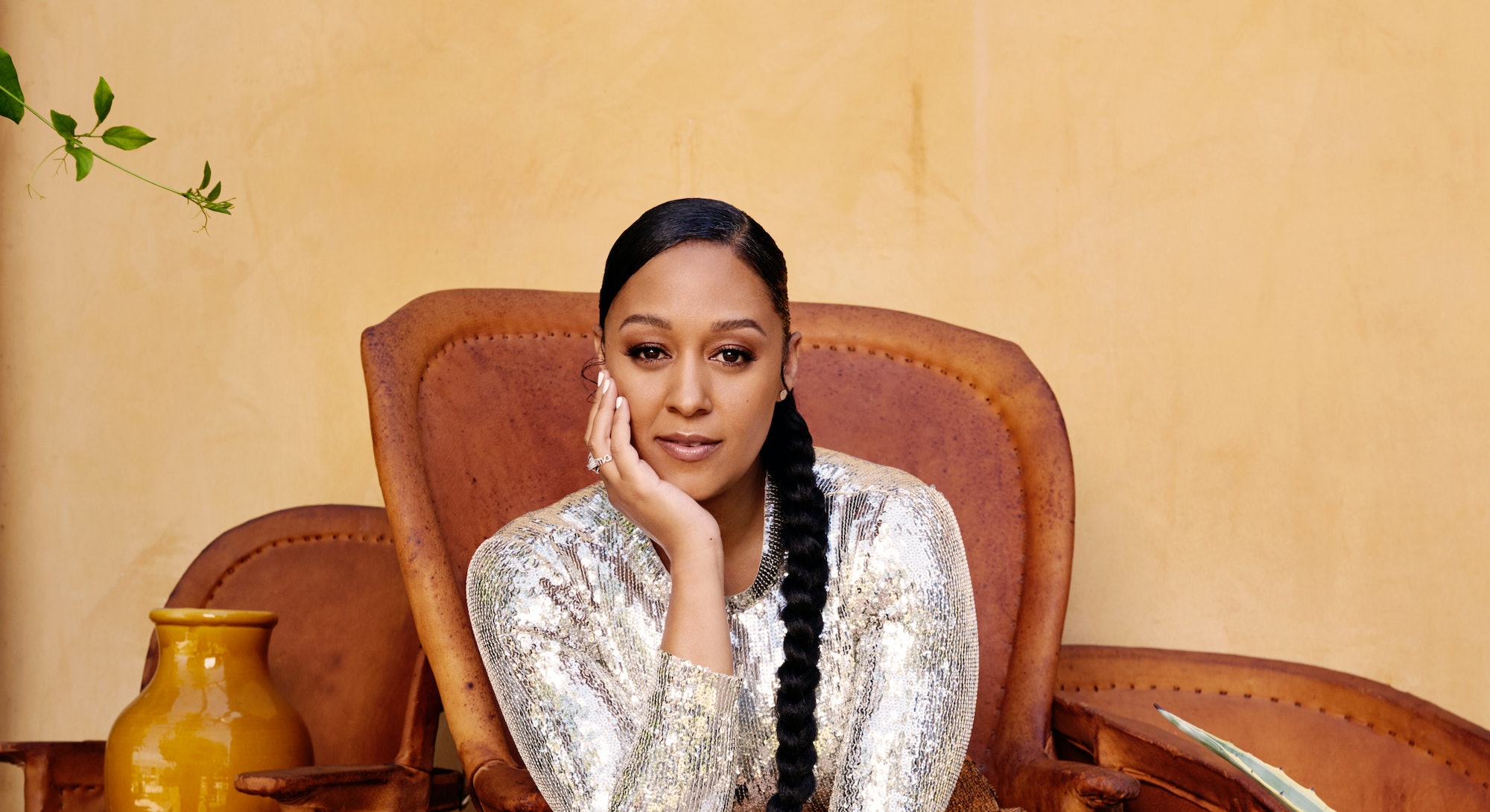 It’s bananas how Christmassy Tia Mowry is. Even in August, in southern California, she is happy to strut through 80-degree heat spangled in gold and silver sequins, shooting a holiday issue. She can name her favorite Christmas albums off the top of her head, in order — Mariah Carey, Celine Dion (“I will listen to her album even when it's not Christmas”), Boyz II Men — and she can instantly summon her position on the holidays’ most controversial modern tradition. “Oh my gosh, I love Elf on the Shelf,” she says. “I've actually done several branding deals with them.”

The lawn is crisping under the heat of the sun, but Mowry, 41, is perking up. “I love Christmas. I love everything about the whole Santa Claus [thing],” she says. Her 8-year-old son, Cree, still believes, and so the challenge this year, as in life, is to keep the magic alive.

Among child TV stars, Mowry has shown unusual staying power. She made her argyle-vested debut alongside her twin, Tamera, on Sister, Sister at 14, and here she is, 25 years and two children later, her marriage to actor Cory Hardrict strong as ever, her latest show renewed. Two years ago, Mowry launched a YouTube channel, “Tia Mowry’s Quick Fix,” where she shares cooking and hair care tips with her 634,000 subscribers, alongside personal vlogs about the perils of child stardom. The Tia Mowry brand is healthy, in other words. She can afford to be honest.

She is high above a canyon, but her life isn’t all tinsel and fairy lights. She speaks plainly about the challenges of finding yourself postpartum and of raising confident children in a world that discriminates against them.

Born to an Afro-Bahamian mother and white father, Mowry says that she didn’t really understand the concept of race until a boy called her the N-word in third grade. “We never talked about [race],” she says. “And then once I brought that experience home, that's when [my parents] were like, ‘OK, we need to sit down and we need to have this conversation.’”

Two years ago, Cree was at summer camp when another child told him that “his brown skin was not a pretty color.” Mowry breaks into tears at this point and dabs her eyes as she says, “When your child is coming home saying that to you, you’re like, ‘Oh god, whether I want to have this conversation or not, you have to have the conversation.’”

Throughout the afternoon, she tells nearly 2-year-old Cairo (“Cai Cai”) how beautiful she is. “I want to create and raise children who love themselves, and I don’t want them to feel insecure in any kind of way toward something that they can’t change,” she says.

Later on, the children join Mowry in the photoshoot, which requires her to stave off a toddler meltdown while persuading an 8-year-old who would rather be playing Fortnite (“How do you tell an 8-year-old to smile with their eyes?” the photographer asks). Mowry glances at a few shots on the monitor in between setups. One, in which the three of them are standing in the doorway looking out to the horizon, stops her in her tracks. “These are so beautiful I think I’m going to cry!” she says through more tears.

Giving birth to Cree in 2011 made Mowry feel like a “lioness,” she says. But after three months of maternity leave, she struggled to find her footing as a working mother. “I was on a show called The Game, and I was constantly in lingerie on that show, so I felt pressured” to lose weight, says Mowry. And whether it was needing to bring a nanny to a shoot location or needing a crib in her trailer for other jobs, she feared being seen as a burden.

“I didn’t have that built-in support or that community,” she says.

“This time around I said, ‘You know what? This is me, and this is where I am now, and if someone wants to hire me, then this is what they're going to get.’”

A shrine started to happen, and we were like, OK, this is unhealthy. We need to have another child.

For seven years, Cree remained the couple’s only child, in spite of constant questions from friends and family about when they were having a second. “We felt like having two kids back-to-back was just too much. And not only that, I wanted to give my son as much attention as I possibly could.”

But one day, walking around the house, she realized that all the pictures were of her son. “A shrine started to happen,” she says, laughing. “And we were like, ‘OK, this is unhealthy. We need to have another child.’” That other child is their off-the-charts adorable daughter, Cairo, who was born in May 2018.

“It was so hard for me to get pregnant with both of my kids,” Mowry says. “Having them here, it's been a miracle.”

Mowry’s second postpartum experience was harder. Three months after Cairo was born, Hardrict left to film a television show in Puerto Rico. Alone with two small children, Mowry became overwhelmed, feeling what she describes as both anxiety and a deep sadness. Her rational mind knew that everything around her was “fine”; still, she couldn’t stop crying. She had intrusive thoughts, worried her baby would be smothered during the night. Like many women, she lied to her doctor about her symptoms.

“When I knew that I had postpartum [depression]… I didn’t want to admit it. It was that shame,” she says.

It wasn't until one of Cree’s caretakers confronted Mowry, noting that she had barely left the house in a month, that Mowry knew it was time to face the truth about her suffering.

I didn’t know how much power I had.

“I told my sister about it. I told my husband about it, and I told my friends about it,” she says. “They became my support system. So when I was sad or going through my emotions, I would talk about it. I didn’t suppress them. I think that helped.”

Mowry did not go back to her doctor for a formal diagnosis of postpartum depression, and in her telling, it was work that pulled her through. “Just being on set and it not being about your boobs and a baby, it was about you again,” she recalls. Mowry says it was around the five- or six-month mark after having Cairo when she finally felt “out of” her depression.

Going back to work after her second baby, Mowry was less focused on what she calls “the snap back” than she had been with Cree; “I did it my way and in my time,” she wrote of her weight loss in an Instagram post at the 17-month mark.

She also didn’t apologize for breastfeeding. With Cree, she nursed for three months but stopped when she returned to work: “I didn’t know how much power I had.” She was able to continue breastfeeding until Cairo was 13 months old, and has been open about sharing that, too, on Instagram, though agents and managers told her not to. “I was like, ‘No, no, no, no, no. I’m going to post this photo,’” she says.

Which brings us up to date: “First of all, I am not afraid to say this, but I literally have to pick up my boobs to see my waist,” jokes Mowry. “Literally haul them up and be like, ‘Oh, there it is.’”

My mother told my dad to spank me. He couldn't do it.

In true Sister, Sister form, Mowry typically spends Christmas with Tamera and her family somewhere relaxing, like Hawaii or Ojai. She loves to pick out a tree as a family, and then decorate it while Christmas music plays. She bakes Christmas cookies, makes hot chocolate from scratch. She seems straight out of a Lifetime Christmas movie, which, of course, she is. A Very Vintage Christmas, airing Nov. 29, features Mowry as a “hopeless romantic” and owner of an antique store.

“It's a very magical time of year for me,” she says.

Now a congregant in the church of holiday rom-coms, Mowry had a very religious upbringing based on the sometimes strict teachings of the gospel. She was born-again at 8 years old, along with her sister, and has chosen to use a different, more attachment-based parenting style with her own children.

Her Netflix comedy Family Reunion focuses on the tension between traditions. Mowry plays Cocoa, a married mom of four who moves her family from Seattle to her husband’s small hometown in Georgia. The show combines elements of classic sitcoms — a fish-out-of-water premise, a studio audience — with pieces of Mowry's own life. A scene from the first episode directly recalls an incident from her childhood. “My dad's white,” she prefaces the story. “You know that, right?”

Onscreen, the moment has a real bite. “I don’t spank my kids, and in the African American community that’s like, ‘What? Who are you? You’re not black if you don’t spank your kids,’” says Mowry of touching a parenting third rail.

I'm just now getting back to taking care of myself.

It is not her philosophy. She bed-shared with Cree until he was 4 years old — “I loved sleeping with my baby” — and thinks a lot about attachment. “There was this one time in particular when I was giving Cairo kisses and he goes, ‘Mommy, you give Cairo more kisses than me.’ And that hurt me,” she recalls. “I was like, ‘Oh my gosh, what have I done?’ … I felt so much guilt.”

The stereotype of the hovering attachment parent is at odds with the reality of Mowry in action with her children. It’s impossible to observe her and not wonder how the hell she stays so calm. When Cree steals his sister’s juice mid-shoot, the production crew holds its breath in anticipation of a meltdown. But Mowry is unflappable.

“Why am I always so chill?” Mowry wonders later, aloud. For all her ebullience, “there’s not a lot of yelling” in her home. “I make it a point to make sure that my environment is a calming environment,” she says. “We meditate and we think about the colors in our house with regards to the vibe. We believe in feng shui when it comes to design.” She has adopted wellness as a central family value, realizing she may have the most work to do on this front.

“I'm just now getting back to taking care of myself,” she says — eating well, working out, generally giving herself a bit of love. Full transparency, she adds: “This just started two weeks ago.”

Tia Mowry is all the way real, with one exception: peddling some white lies in service of Old Saint Nick and the elf. “I know that some people think, ‘Oh ... you're not being honest,’” she says. “But that's Santa Claus.”